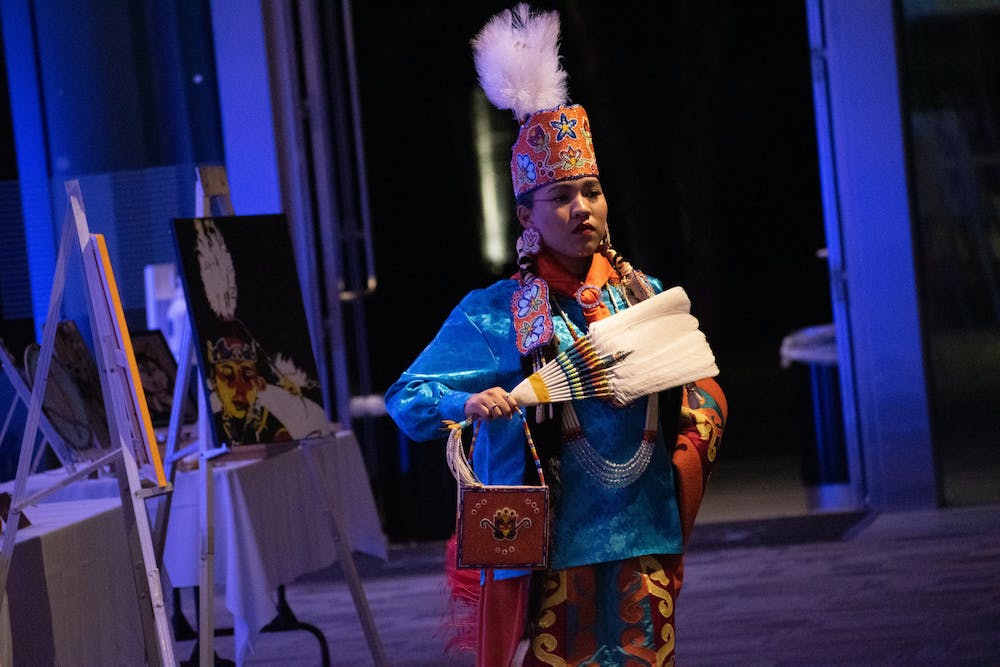 The first-ever Indigenous arts showcase and gala featured Indigenous artists and a student fashion show at the Penn Pavilion on Saturday night.

The event was organized by the Duke Native American/Indigenous Student Alliance and the Nu Chapter of Alpha Pi Omega Sorority, the only Indigenous Greek organization on Duke’s campus.

Izabella Bullard, one of the featured artists, is a citizen of the Lumbee tribe. She stood behind her table covered with sketchbooks and paintings during the gallery walk, chatting with attendees about her work.

Bullard pointed to a larger painting of two women mounted on an easel beside the table. “[This painting] was inspired by a poem about Indigenous women being warriors across time, two generations,” she said. “I chose two aboriginal women who really inspired me.

“On the left we have the female chef. She fought for her people, she was one of the most important leaders of her time,” Bullard said. “On the right you have Debra Haaland who was one of the first Indigenous women in Congress, and now she’s Secretary of the Interior fighting to preserve the land and the rights of Indigenous peoples.”

Bullard saw the showcase and gala as “a great way to connect with other people and the Aboriginal community, and especially other artists.”

Among the art tables scattered around the room was a display of text panels created by Quinn Smith, president of NAISA and citizen of the Chickasaw Nation. The exhibit displayed words like “blood”, “land” and “kindred”, each accompanied by the word’s meaning to Smith.

The board noted that the university exploited the Trinity College Industrial Indian Boarding School in the late 19th century. He also noted that Duke still does not have an Indigenous Studies program, which is a continuous demand of indigenous and indigenous students at Duke.

Smith reiterated that claim at the event’s closing, noting that North Carolina has the largest native population east of the Mississippi.

“We are very grateful for the recent hiring and tenure of two Indigenous faculty…and we would like to see that continue,” Smith said, referring to a cluster hiring which was completed in the spring of 2021.

Senior Gianni Lacey-Howard, President of the APIO Nude Section, Chair of NAISA Co-Events and Citizen of the Occaneechi Band of the Saponi Nation, opened the scheduled portion of the evening.

“Although Indigenous students are a small population on campus, it warms my heart to see and feel the solidarity in the room,” she said.

“We are gathered today on lands that were traditionally part of the territory of the Saponi people in the Piedmont of what is now the state of North Carolina. The Saponi people, whose descendants include the Occaneechi Band of the Nation Indian Tribe Saponi, thrives and still lives in this area officially recognized by the North Carolina state government,” Jeffries said.

During the fashion show portion of the event, eight different audio stories featuring instrumentals by Indigenous artists played over the speakers as the students recording them walked past the attendees.

Sophomore Reyna Cardoza, treasurer of NAISA and the Nu chapter of APIO, is Chickasaw, Cherokee, Seminole, and Creek. Cardoza was part of the fashion show and spoke about the importance of what she wore after the event.

“I wear a Chickasaw necklace. It is made from beads and usually fish wire. It’s my mom’s, actually, and she was a bridesmaid at my grandmother’s traditional Chickasaw wedding. That’s where she wore this, and she gave it to me to wear tonight,” Cardoza said. “I carried it with me coming out here, and I feel like it really strengthened me.”

The evening also included a vocal performance by A.yoni Jeffries, a member of the Occaneechi Band of the Saponi Nation, and Iroquois social dances led by Patrick Suarez, a citizen of the Meherrin Nation.

Lacey-Howard was proud to have participated in the gala and showcase, the first of its kind on Duke’s campus.

“It was great to be able to be part of history and create events that establish visibility for Indigenous students on campus,” she said after the event. “We really wanted to do a meaningful night that not only shows the resilience of Indigenous people, but also the arts and beauty of being Indigenous.”

Cardoza reiterated the amount of energy that has been invested in the planning process, and she believes the energy expended will not be wasted.

“I hope that [other Indigenous students] will see this event [and] see why we fought,” she said. “And instead of feeling alone and away from home, I want them to feel like they have family here to support them and people are there for them.”

Get The Chronicle straight to your inbox

Vishal Jammulapati is a Trinity sophomore and associate editor of the 118th volume of The Chronicle.