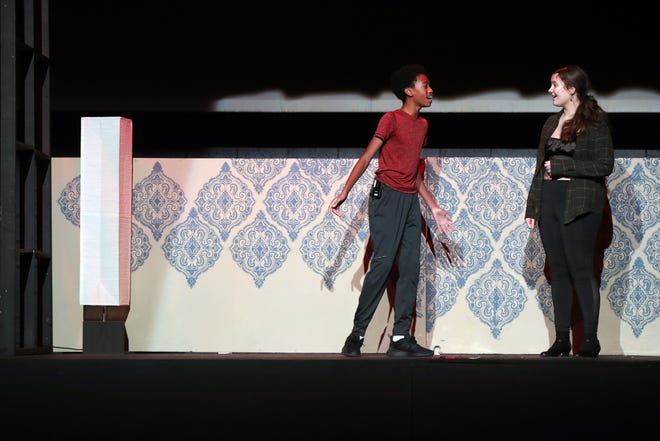 A magical vacation experience will be delivered on and off the stage by the Westerville Central High School Warhawk Theater Department with “Elf the Musical Jr.”

Kids of all ages can follow Buddy the Elf’s journey in the musical, then meet him, Santa, and several Elves afterward.

“Christmas is a time for family, and ‘Elf’ is the story of family – whether it’s the one you were born with or the one that raises you,” said Stephanie Matushoneck, director of the theater.

She said the theater group wanted to create an interactive experience for families during the holiday season.

Based on New Line Cinema’s 2003 hit, “Elf,” the story follows Buddy, a young orphan, who mistakenly crawls into Santa’s sack of presents and is transported to the North Pole, Matushoneck said.

Unaware that he is human, Buddy is raised like an elf until his enormous size and poor toy-making abilities put him in the face of the truth, she said.

Courtesy of Santa Claus, Buddy sets out on a trip to New York City to find his father and discover his true identity, she said.

Confronted with the reality that his dad is on the “villain list” and his half-brother doesn’t believe in Santa Claus, Buddy is determined to win over his new family and help New York City remember the true meaning of Christmas, Matushoneck said.

Senior Aaron Dick has said Buddy is one of the most energy-consuming characters he has ever played.

“I think the audience will really appreciate the overall message of the show,” he said. “It’s all about family and how the holidays can bring people together, so I think it’s something so important to take away after spending so much time apart.”

Dick said the show was a great way to get people into the holiday spirit.

Senior Evi Clark, who stars as Buddy’s friend Jovie, said she appreciates the opportunity to do magic with everyone in the cast.

“Families can look forward to being immersed in the magic Aaron Dick brings to Buddy the Elf, as well as spending time with other friends of Santa Claus and the man himself,” a- she declared.

The boxes provide child-friendly, nutritious, and non-perishable food that children can eat or prepare themselves on weekends when not at school, she said.

All seats at “Elf the Musical Jr.” cost $ 10 and are general admission.

Space is limited and district COVID protocols will be followed, including the public wearing masks and social distancing between groups.

Tickets are available at the Warhawks Theater website,wchsheatre.net.

In addition to “Elf the Musical Jr.” in Central, Westerville Parks and Recreation PR specialist Toni Schorling said Santa and the elves were busy packing toys at the North Pole for the packed house Snowflake castle.

She said the city also offers Letters from Santa, Night at the North Pole, Swimming with Santa and Noon-Lite Madness as holiday programs.

All require registration at westerville.org/register and are limited on space.

The city has also scheduled a Holiday Fun Night from 5 p.m. to 8 p.m. on December 3. The holiday tree in the City Hall courtyard will be lit up at 5 p.m. instead of 7 p.m., as previously planned.

Instead of a gathered ceremony, Schorling said, the tree lights will automatically come on at 5 p.m., along with the other festive yard lights and live performances in Uptown Westerville.

More information is available at westerville.org/holidaysinuptown.

Op-Ed: To Address Past Injustices Against Indigenous People, We Need To Go Beyond The Renaming Of Holidays