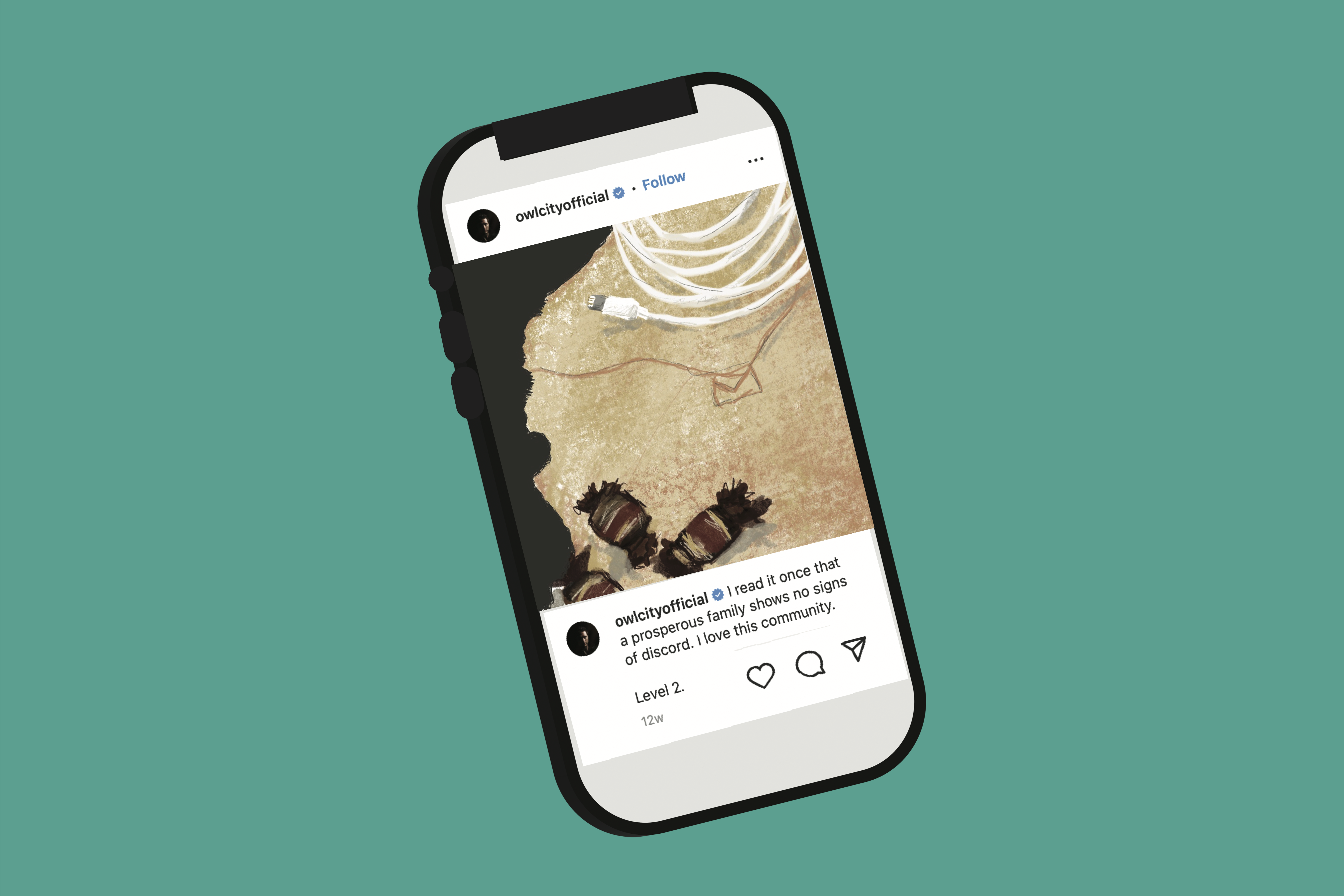 Owl City is releasing new music this fall and, ironically, with all my heart, I’m happy. When Adam Young, the creator and lead singer of Owl City, announced by Instagram on June 23 that “new music, new tour and new merchandise” would drop soon, I immediately anticipated more announcements.

I should have been better informed.

Owl City next instagram post was as enigmatic as it gets: Set on a beach, a black box containing a sonar system scans and flashes the letters x and y along with an obscure mathematical equation. The opening line of the message is “Want to play a game?” which, to be honest, I don’t. I want an album – still I want one, because we’re still waiting — and I want it served on a silver platter. I want an email or Tweet that says “Hey, here’s the album!” but Nope. Instead, I was forced to relearn math and start solving puzzles. I’ve actually had to solve a lot of puzzles over the past few years because musicians seem more and more determined to make me work hard on their albums, and I’m really, really need to understand why.

Let’s start with the basics: what is an ARG? I’m glad you asked. ARG is an acronym for “alternate reality game.” These games are interactive narratives spread across various plot threads that are ultimately completed by multiple players or participants, and they are discovered and told using a variety of modern digital platforms, media and technologies. They typically use puzzles, coding, and secrecy to keep players engaged and build communities around them. Also, ARGs generally don’t present themselves or identify as games – when the goal is immersion and reality is used as a medium, ARGs don’t want to be too obvious with their intentions. They are historically free and used to promote other products: see “Find 815” in relation to ” Lost “, “I like beesfor “Halo 2” or, you know, the ARGs that support scrapbook.

In 2007, the American rock band Nine inch nails worked with studio ARG 42 Entertainment produce a promotional ARG for the album Year zero. The ARG, also titled “Year Zero”, was released in February 2007, and the album followed in April. The game takes place in “a future in which a fundamentalist American government causes the end of the world.” An in-game resistance group sends government information to Nine Inch Nails fans in the past to help them save the future. The narrative was furthered using websites, codes, and even information broadcast at Nine Inch Nails live events. The group was among the first to use this promotional tool for music, and fans have continued to interact with the ARG years after “Year Zero” was released. Most of the game’s elements are now obsolete in their day, but their use has proven the cultural impact and longevity of ARG marketing.

ARGs are still used today; Alternative rock band Twenty One Pilots are no stranger to ARG marketing, which they have executed with exceptional popularity and publicity. In 2018, the duo began posting images, URLs, and cryptic letters on their various platforms. Reddit user jakedello discovered this for the first time URLs on the Twenty One Pilots store carrying a strange disclaimer to keep the site and the message secret. Codes and URLs continued to appear, introducing characters and places such as Clancy and Dema as fans unfolded over the ARG. It was ultimately a teaser and narrative for their fifth studio album. Trench (released in 2018), but the ARG continued in 2020 with an encrypted live stream that would become the catalyst for the surroundings of the ARG their single “Level of Concern” and the album that followed, Scaled and Glazed. The story was still active as recently as March 2022and manages to make waves among the band’s fans as entire Reddit threads, Discord Channels and research papers dedicated themselves to resolving the narrative and anticipating new music.

Thus, Twenty One Pilots and Nine Inch Nails used ARGs pretty one with success. I’m sure there are many more examples of ARG music marketing that I don’t know about, but my editors need to limit my word count. Still, it would be rude of me to tease you with Owl City at first and not deliver. When news of the new album and ARG broke, I, like any decent journalist, hopped on Discord. I knew I wouldn’t have the time or skills to follow the narrative myself, so I joined a Owl City ARG server to follow the narrative as best I could.

As far as this article goes, I’m not as concerned with the details of the ARG as I am with its impact and follow-up. The Discord server itself has been visited by thousands of people, based on emoji reactions to posts in the “rules” channel, and at the time of this writing, the original instagram ad has over 16,000 likes. Although these numbers are not astronomical in the modern social media landscape, they are substantial enough to suggest that there are engagement success to be found in ARG marketing.

But that still doesn’t answer my original question: Why do I suddenly see an uptick in this advertising tactic? You don’t need me to tell you about traditional marketing strategies. These include billboards, broadcasting, print advertisements and events. You probably don’t need me to tell you about either. digital marketing tactics, That is. These are email, social media, apps and online engagement. And if there’s one thing we’ve discussed today, it’s engagement. It’s fair to say that most people, especially younger people who are more likely to be fans of artists like Twenty One Pilots and Owl City, use online platforms like Instagram, Twitter or Reddit. Interact with a brand or musician’s social media posts increase their visibility both inside and outside their suite. They literally force audiences to engage by sending them on code-cracking and mystery-solving adventures that require a hands-on approach if one is to be the smartest, most dedicated fan.

This engagement, however, is usually part of a larger social media-driven conspiracy to raise awareness of new releases. And who could blame the musicians? In a world where online presence and virality are increasingly important for success in the real world, especially in the music industry, I understand. I understand the mad dash for audience engagement that seems essential to the success of an album or a single. Build the hype — cringe – is needed in our fast-paced digital world of endless scrolling and consumption, and it seems musicians have just found a new way to do it.

My annoyance with using ARGs has certainly lessened because even as I write this I wonder how this article is going to do in terms of engagement and how I might promote it even though I don’t know how to design an entire video game. I don’t mind my favorite bands’ attempts to increase their success, and from an artist’s perspective, I also understand the desire to expand their horizons and do something new and exciting rather than using the boring promotional tools of the past. Because, honestly, ARGs are coolman.

I’m fascinated by their use and how immersive they can be but, with the immediacy of the modern world, I find myself wanting albums and wanting them now. I recognize that ARGs are valuable art, but I find it difficult to undertake the task that the artist requires of me for something as important as an album because I’m used to have art at your fingertips. Or maybe I’m not a fan of Owl City enough. Still, if they’re going to launch a marketing campaign, I commend them for making it interactive and so meticulously crafted. What bothers me is that we don’t have a new Owl City album yet. Adam, if you’re reading this, you announced new music in June. Cinematic was released in 2018. It’s been four long years, Adam, please for God’s sake release Something.