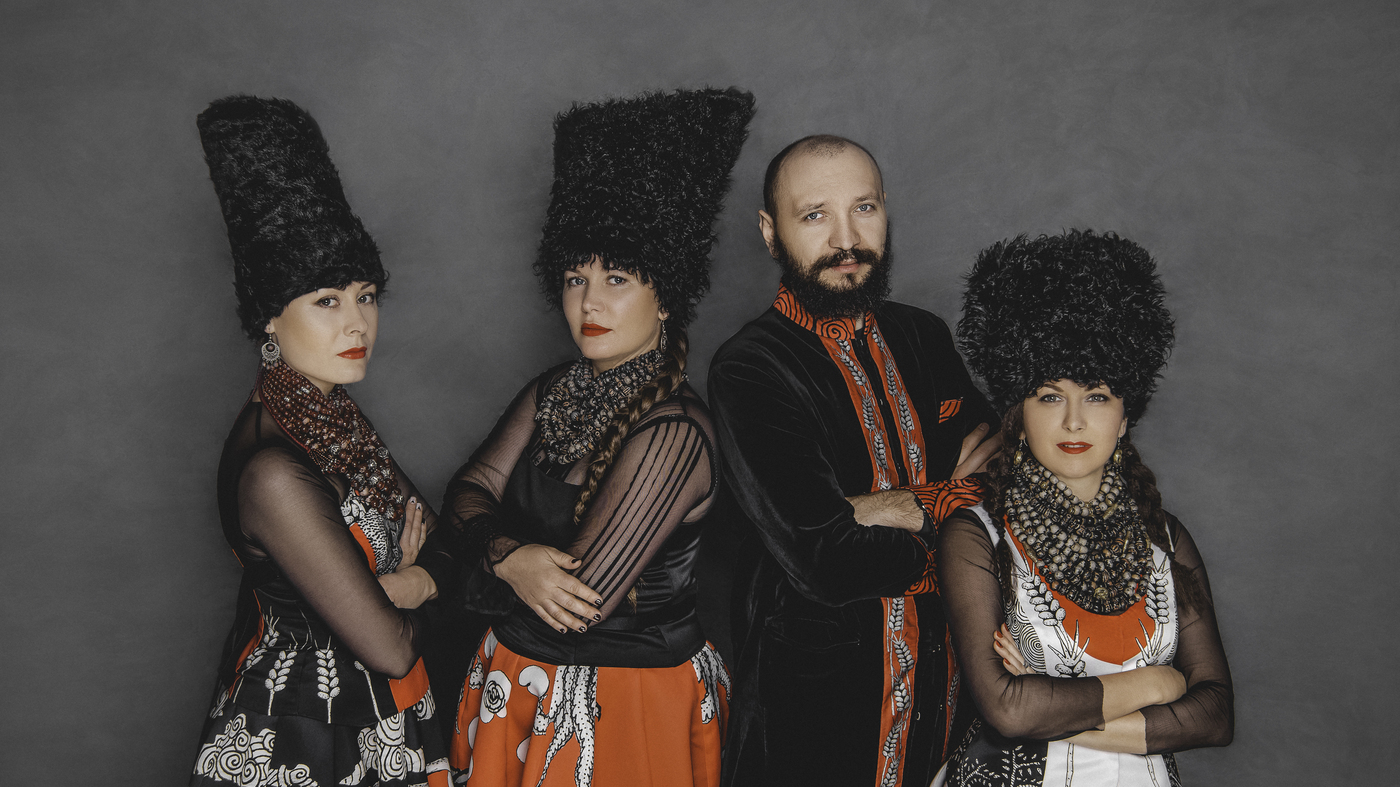 The Ukrainian group DakhaBrakha is called “ethno-chaos”. Over the past decade, this Ukrainian folk-meet-punk band has brought their music to audiences around the world. They recently launched a tour of the United States – just weeks after Russia invaded their country.

For years, the DakhaBrakha called themselves “ambassadors of free Ukraine”. Their shows were punctuated by cries of “Stop Poutine!” and “No war!” Now they hear those requests reflected and amplified around the world.

The name of this quartet means “give/take” in old Ukrainian – and that’s exactly what they do. Cabaret, jazz, rock and hip-hop are part of the group’s DNA. But they also explore all kinds of old Ukrainian folk styles, nurtured by the prism of the 21st century.

Marko Halanevych, the group’s only male musician, usually gets the audience talking; the other three musicians, Iryna Kovalenko, Olena Tsybulska and Nina Garenetska, let the music speak for them. During our conversation, the band’s manager, Iryna Gorban, performed for us. Foremost in everyone’s mind was the fact that this tour was taking place amid so much violence and heartache at home.

“Well, of course, it’s a big pain and a big tragedy for our country, and we feel it every moment,” Halanevych said. “A lot of people in Ukraine and around the world tell us that it’s our best possibility to be useful and useful, is to be on stage and show people our culture, our music and tell our story and to tell the story of our country.

The group has a strong sense of showmanship – DakhaBrakha was born in an experimental theater in kyiv, just like their sister group, Dakh Daughters. When DakhaBrakha burst onto the international scene a decade ago, they wore unforgettable tall, angular hats and rich costumes that evoked an array of ethnic Ukrainian styles. Their music was fierce, exuberant and laced with humour. They were players.

But for this current tour, the band needed to adopt a much more serious and urgent tone. Projected backdrops include videos of ravaged Ukraine. The comments from the scene are all about the fate of their country. And there are collections at the door for a charity that helps Ukraine. Halanevych says the band hopes their audience will understand the need for this change.

“Usually we had fun of course on stage and we have this humor, but not in this program with every minute, people who die in your country”, he notes. “So it’s really impossible to feel that joy of music. That’s why it’s really difficult to find that balance between art and political expression. But we try to do it.”

Part of the Russian propaganda message has been that Ukraine does not exist as an independent nation with its own culture, history and language.

But that’s a big part of the reason Dakha Brakha exists. Maria Sonevytsky is an ethnomusicologist who teaches at Bard College in New York. She has written extensively on Dakha Brakha.

“I think one of the most powerful things that DakhaBrakha can offer is that they both show that there is a very rich past in Ukraine, and they show it by bringing together a diversity of musical practices from different parts of Ukraine, from different ethnic groups in Ukraine,” Sonevytsky says. “And they merge them in a beautiful way that also suggests a future for Ukraine. This belies Putin’s propaganda that Ukraine has no culture or history of its own.”

“In fact,” Sonevytsky continues, “what we see in the art of Dakha Brakha is a deeply heterogeneous and complex history, the legacy of multiple imperial experiences, the long history of attempts at Ukrainian sovereignty, and they mix these types of fractured pasts into a beautiful whole that is not simple, and which cannot be simply reduced to the history of a nation occupied by a people, but rather suggests a dynamic, if imperfect, democracy.

Despite Dakha Brakha’s ambivalence about touring under such complicated circumstances, Sonevytsky says it’s still a way for Americans to establish a personal and emotional connection with Ukraine.

“No Ukrainian musician I know would say that their songs will withstand a nuclear bomb. No one is delusional enough to say such a thing,” she says. “But if we’re fighting what could be an attempt at genocide, the complete obliteration of Ukraine, then I think keeping that culture in mind, learning about it, listening, is key.”

It turns out that the band had no reason to worry about the reaction of the American public. At the end of a recent show, the audience stood – and some sang – as the band sang the Ukrainian national anthem.

In a bid to connect audiences with Ukraine, DakhaBrakha is continuing its US tour this month and through May.