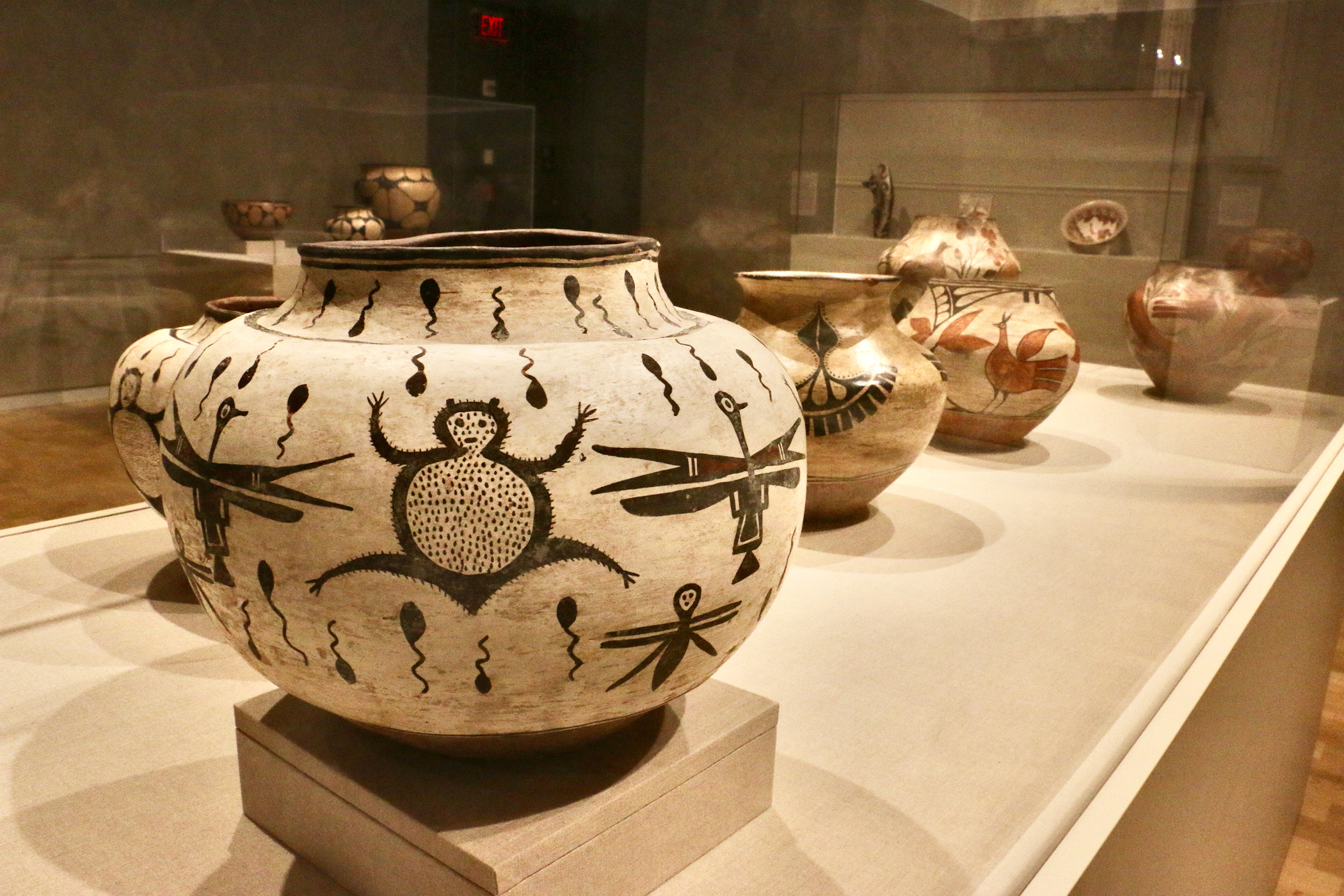 The Barnes Foundation Centers Indigenous Art Past and Present

The exhibit was also curated by Tony Chavarria, a Santa Clara Pueblo and curator of ethnology from the Museum of Indian Arts and Culture in Santa Fe, New Mexico. He said the Barnes collection shows the collector’s bias: Barnes’ favorite decoration, largely ignoring the monochrome pottery for which the Pueblo are also known.

“It’s a good range of materials, although a lot of it is painted work. There’s not a lot of redware or blackware in there,” Chavarria said. “He liked the design. He liked to paint. It is a common attraction for many people.

Chavarria stressed that the works collected by Barnes were not intended for tourism or the art market. Many jars exhibit “dipper damage” to their openings, small chips caused by a gourd dipper hitting against the lip when a user scoops water. He said some pieces show what’s called “native repairs,” meaning damage that was repaired by the community that used the piece, not by restorers after the piece was entry into the art market.

“I think there’s something deeper that spoke to him because of the way he looked at art when it’s done in community,” Chavarria said. “It has a different facet than if it’s something that’s made to be exhibited.”

During Barnes’ lifetime, few pieces were exhibited to the public. When the Barnes Foundation moved into its new building in 2012, several Pueblo pieces were displayed in display cases downstairs near the gift shop, auditorium, and cafe.

The architects of the new building included a nod to Barnes’ passion for Native American art: Tod Williams and Billie Tsien designed the upholstery of the long seats with patterns inspired by Pueblo textiles.

Curators believe Barnes was attracted to the coins, in part because they emerged from a language of symbols and techniques unique to a particular community. However, they are not convinced that Barnes appreciated the cultural and historical forces that shaped pottery and textiles, particularly colonization by the Spanish and Americans.

For example, most storage jars were designed to be a certain size, in order to transport a specific amount of corn to the Spanish conquerors in the 17th century. The Spanish imposed forced labor on the Pueblo and Diné natives, and taxation in the form of 1.5 bushels of corn. The size of their pottery is derived from this system.

The Pueblo successfully rebelled against their conquerors in the 1680 Pueblo Revolt, killing about 400 Spaniards and driving them out of the territory. However, 12 years later the Spanish returned and reasserted control of the region.

Much of the work in the exhibition is woven or painted in patterns representing the balance between earth and sky, and the spiritual forces of wind and water. The title of the show comes from the Tewa Pueblo concept of Po-wa-ha (wind, water, breath) as the flow of energy that animates all life. This energy is represented, for example, in the painted spirals and hatchings in pottery, and in the contrast of materials in jewelry.

“You get this idea that these things weren’t made in a vacuum or just for sale, but they were part of an ongoing, continuous, and enduring practice,” Chavarria said.