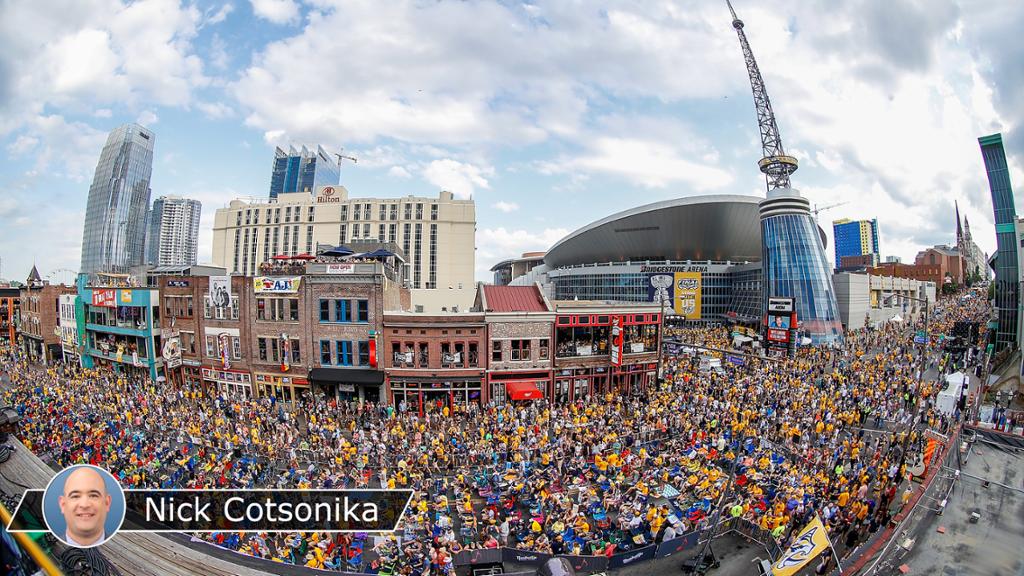 They expect more than 65,000 fans — the largest home crowd in their history and one of the largest crowds in NHL history — for an event that will combine hockey and live country music like never before. previously.

“It’s something historic to do,” said Tennessee Titans left tackle Taylor Lewan, a Predators fan who will attend an NHL game at the stadium he plays in the NFL. “It’s very cool that a hockey team is playing out in the South at my office, basically.”

But that’s just the natural evolution of NHL events in what has become a honky-tonk hockey town.

“It’s a reward for your franchise, for your fans and for the city,” said David Poile, the Predators’ general manager since joining the NHL in 1998-99. “It will simply be a fabulous event for us and just another step in the direction we want to go as a successful franchise on and off the ice.”

The first time the Predators hosted an NHL event was during the 2003 NHL Draft. Poile said Nashville received a big boost as a hockey market due to the crowds of hockey players who participated.

“And I think, honestly, how much fun everyone had downtown,” Poile said with a laugh.

Nashville received a bigger boost when it hosted the NHL All-Star Game in 2016 and the Stanley Cup Final in 2017.

The 2017 Stanley Cup Final raised the bar (and bar roofs). Before the third game, Alan Jackson performed on a temporary stage on Broadway. Prior to game six, Luke Bryan performed on the third floor of the Tootsies World Famous Orchid Lounge. Each time, tens of thousands of people invaded the street, the sidewalks and the honky-tonks.

“This place is amazing,” Mayer said. “We absolutely realised, ‘We need to do an outdoor game here. One thing leads to another.”

Mayer’s goal at every NHL event is to make it unique and city-specific. As a former executive producer of IMG Media, he draws on his background in music and entertainment. Some cities are easier than others.

“Here it’s like, ‘OK, we’re going to Nashville — music and entertainment and Broadway and the Preds,'” Mayer said. “But there are a lot of moving parts in this one. We kind of challenged ourselves to make it memorable.”

This time the festivities begin Thursday, when the Predators retire Pekka Rinne’s No. 35 before taking on the Dallas Stars at Bridgestone Arena (8:30 p.m. ET; BSSO, BSSW, ESPN+, NHL LIVE).

Thursday through Saturday, the Predators will host Bridgestone Winter Park, with food, activities, exhibits and, of course, live music at Walk of Fame Park near Bridgestone Arena.

Broadway will be closed on Saturday.

“The scene on Broadway is going to be pretty spectacular,” Mayer said. “I think all the bars are going to rush.”

Fans can cross the Cumberland River on the John Seigenthaler Pedestrian Bridge, which will be decorated for the Stadium Series, and attend the Truly Hard Seltzer NHL PreGame Fan Festival outside Nissan Stadium.

The teams will make a special entrance.

The Stadium Series is intended to be progressive and not nostalgic like the Winter Classic or the Heritage Classic. Inside Nissan Stadium, the field will celebrate Broadway, complete with neon lights, a cowboy boot with a skate blade and a cowboy hat with a hockey stick in its stripe.

Live music will play throughout the night, with not one but two headliners at the first intermission: Miranda Lambert and Dierks Bentley.

“We actually have three stages – not one, not two, but three stages – that are on the ground, and because it’s Nashville, the band gear is going to stay on it the whole time,” Mayer said. “It’s part of the set design. It will look like a honky-tonk.”

Nashville is well beyond the need to establish itself as a hockey market. The Stadium series is proof of that. But the region is growing rapidly and hockey has room to grow. The Stadium Series can help with that.

Predators president Sean Henry estimated that 100,000 people moved to the Nashville area during the COVID-19 pandemic.

“There are a lot of people who haven’t had a huge event with us,” Henry said. “So this is also an opportunity to open the doors again and say, ‘You may have moved from Detroit, Philadelphia, New York or Toronto, anywhere, come and have a taste of Predator hockey, because it’s is great fun.

BTS’s ‘Dynamite’ Becomes Third Music Video For The Group To Hit THIS Milestone On YouTube; Read