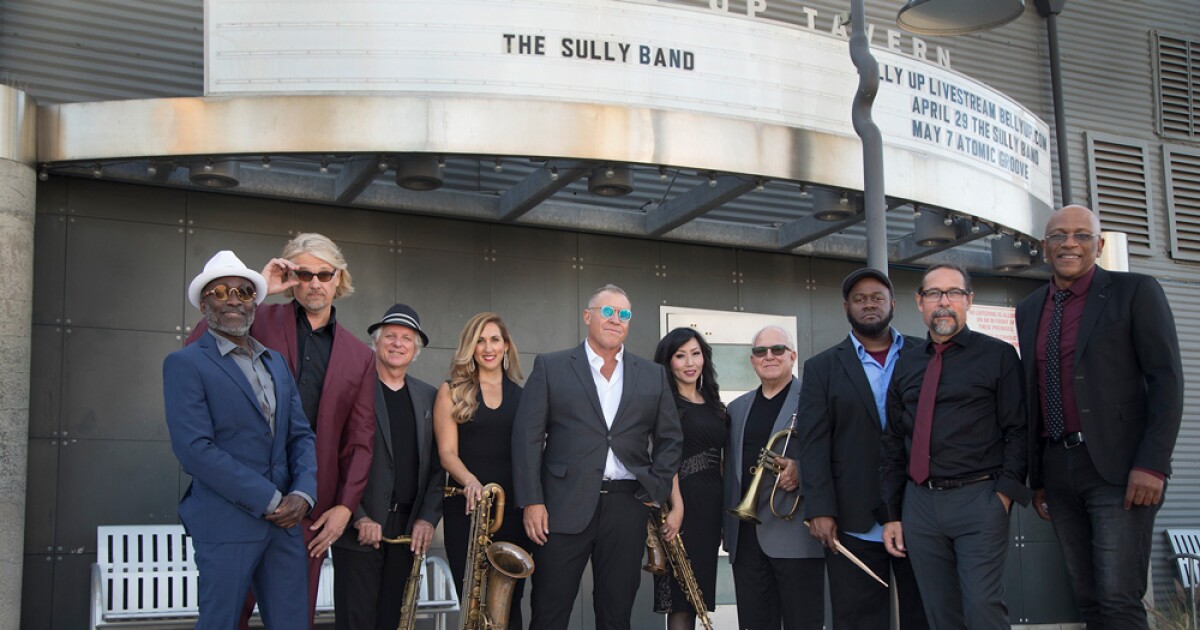 Sully, financial advisor and TV and radio business host by day, puts on his soul shoes to sing by night

Robert “Sully” Sullivan may not be the oldest singer to ever release a debut album, although at 61 he ranks in the upper echelon of late musical flourishes.

But he’s probably the first to balance leading a band of nine vintage soul, blues, funk and R&B musicians at night with his day jobs as an investment banker and entrepreneur, who also hosts TV shows and local and national commercial radio stations.

And he’s probably the first to say he has a “bifurcated personality” because his late father was a music-loving drug dealer and his business-minded mother worked in administration at General Dynamics and Hughes Aircraft. .

“If Hillary Clinton married (Guns N’ Roses guitarist) Slash, I would be what you would have!” joked Sully, as he’s known professionally.

As the namesake of the Sully Band, he leads one of the most ethnically diverse bands in San Diego. It’s also the only band here with a four-piece horn section that includes two women (alto saxophonist/flutist Tomoka Nomura and baritone saxophonist/flutist April Leslie) and two men (trumpeter/flugelhornist Steve Dillard and saxophonist tenor, flautist and harmonica player Tripp Sprague).

“My half-brother, Tirell Willis, is black and my dad raised me listening to Otis Redding,” said Sully, who was formerly the frontman of Sully & The Blue-Eyed Soul Band and Sully & The Souljahs, inspired reggae.

“You could say it was one of my artificial goals to have such a diverse lineup when I created The Sully Band, but that wasn’t the case. I think this band is a representation of what Southern California and much of this country looks and should look like.

Almost every member of The Sully Band has impressive credits, including bassist and musical director James East. Brother of San Diego great bassist Nathan East, he’s worked with everyone from Patti LaBelle and Lionel Richie to Elton John and Eric Clapton.

The talents of The Sully Band are beautifully showcased on “Let’s Straighten It Out”, the band’s 10-song debut album. Released today, it was produced by seven-time Grammy Award winner Chris Goldsmith, who is the chairman of Belly Up Entertainment and has helmed albums by Ben Harper and The Blind Boys of Alabama, among others.

“I think a big part of that is that I’m by far the worst musician in my band,” said Sulley, whose album is released by Belly Up Records and distributed nationally by Blue Élan.

“When people find out I’m in a band, I’m hesitant to talk about it because they usually think guys in their 60s who are in bands wear cargo shorts and sing Jimmy Buffett songs. And I don’t definitely don’t do that.

What Sully does on his fervent and passionate debut album is to dive deep into soul, funk, blues and vintage R&B songs from the 1960s that have been carefully selected by Goldsmith.

Some of them, like “I Wish It Would Rain” by the Temptations and “Higher and Higher” by Jackie Wilson, are classics. The majority are more obscure, including Shuggie Otis’ “Ice Cold Daydream,” Albert Collins’ “If You Love Me Like You Say,” and Dr. John and Jessie Hill’s rave-up “When the Battle is Over.” gospel-tinged. which features a bravura vocal performance by Rebecca Jade.

“Chris made me dive really deep,” said Sully, who admits he didn’t know most of the songs on his album until Goldsmith played them for him.

“In his live sets, Sully does a lot of blue-eyed soul songs by Joe Cocker and Michael McDonald, and he’s influenced by the same people who influenced them,” Goldsmith noted.

“He has a great affinity for this music, but it didn’t make sense for him to record it. The challenge was to find material that hasn’t been covered by so many people — and that worked well in Sully’s wheelhouse, vocally.

“He’s done a great job and I’d like to think this record can be a big hit. Even if it’s not, it’s a very believable record. And it’s starting to get some radio airplay at Santa Cruz, Tampa, Santa Fe and Charlottesville stations.

Originally from Chula Vista, Sully grew up in South Bay, University City and the Mount Helix area. When he was in college, he and his half-brother started playing guitar and harmonizing to songs by James Taylor, Seals & Crofts and other favorites of the time.

“We realized we could be really popular with girls that way,” said Sully, who credits his half-brother with fueling his interest in Broadway musicals.

“I’ve been in the San Diego Junior Theater and Starlight Bowl productions. I’ve played Curly in ‘Oklahoma’ about seven times, and I was in ‘Brigadoon,’ ‘Guys and Dolls,’ ‘South Pacific,'” A Chorus Line” and “Bye Bye Birdie”.

“I got a scholarship at USD in musical theatre. Then I transferred to SDSU and majored in Journalism and minored in Music. But I left about 12 units before graduating, after signing a development deal with Island Records and moving to Los Angeles.

When his dream of becoming the next James Taylor failed to materialize, Sully discovered he had a knack for entrepreneurship. After trying his hand at publishing in Los Angeles, he returned to San Diego, flourished as a financial investment adviser, and became a fixture on local radio and television.

“Sully is a true entrepreneur who has built himself a true media business,” Goldsmith said. “His musical endeavors are a natural part of what he does as an entertainer and TV personality, and it all seems to be going well so far.”

During the COVID-19 shutdown, Sully funded a series of his band’s streaming videos and performances and paid each member themselves. He donates a portion of the proceeds from each concert he gives to the Challenged Athletes Foundation and other charities.

“My goal,” Sully said, “is for my group to fill Belly Up size clubs in every city we play. I’ve got 20 good summers left, maybe 25, and I’m not close to having I’m a perfect example of someone starting to pursue their (musical) dream at age 61.

MoneyMutual Review – Reliable Loan Company Worth Using Or Not?