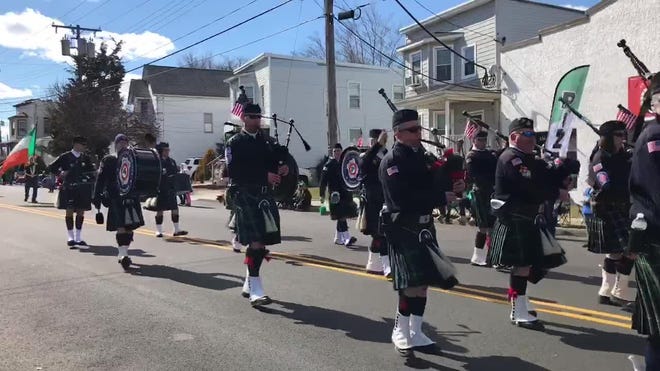 After two years of COVID cancellations, St. Patrick’s Day parades will return to Middlesex and Union counties next month.

Woodbridge Mayor John E. McCormac hopes the parades are the harbinger of a return to normalcy.

“It will be a much-needed psychological and emotional boost for the people of the township. I hope it symbolizes that the pandemic is coming to an end,” McCormac said.

About 50 to 60 bands are scheduled to participate in the Woodbridge Parade, including seven pipe bands and the marching bands from Woodbridge High School, Colonia High School and JF Kennedy High School.

“It’s a good time for everyone, whether you’re Irish or not, but I happen to be,” McCormac said. “There’s nothing quite like bagpipes ringing down Main Street.”

The Woodbridge Parade is one of the longest in New Jersey.

“We’re a long parade. We take a few hours to go through it,” said Ben Campbell, chair of the Woodbridge St. Patrick’s Day Parade.

Middlesex County Commissioner Charles Kenny, a former councilor for Woodbridge, will be the grand marshal. Also in the parade will be Karen Devlin, Irish Woman of the Year; Jim Leathem, Irish Man of the Year; Sarah Olexa, Miss American Irish and Victoria Gomez, Lady-In-Waiting.

McCormac and the Township Council presented the American Irish Association with the key to the township for community involvement, including food drives, park cleanups, veterans’ activities, picnics and scholarships .

“It was a great honor. We are very proud of it,” said Ed McSherry, president of the American Irish Association of Woodbridge.

“It was a total disappointment (last year),” McSherry said of the cancellation. “You have the honorees and their families arriving from other states, it’s quite important to them. Not having it was very disappointing, but on the day of the parade, we still had a little ceremonial flag raising and a breakfast.”

South Amboy is ready for the return of the parade.

“We’re ready,” said Mickey Gross, co-chair of the South Amboy Parade Committee. “It’s time to get back to normal. We will implement any CDC recommendations that may be in effect at that time. »

The parade, which began in 1976, will feature approximately 24 bands, including Colonel DB Kelly Pipes and Drums, a steel drum band and a band of Philadelphia Mummers.

“It’s a multicultural event,” said Judi Gillingham, secretary of the South Amboy parade committee. “Our county and our state have become so ethnically diverse; we want to offer an all-inclusive parade.

Dempsey, known as “Demps” to friends and family, has been a member of the Ancient Hibernian Order of South Amboy for nearly a quarter of a century and served as the organization’s treasurer and financial secretary.

He and his wife Phyllis owned Phyllis’ Sugar Bowl, which offered homemade chocolates and ice cream for more than 28 years in its former location on Broadway.

“I’ve had a lot of success in my life, but being named South Amboy’s Parade Grand Marshal is an honor I can’t explain,” Dempsey said. “It left me humbled and speechless and as I look back on my 88th birthday I can honestly say it’s the icing on the cake.

Additional marching organizations are still being sought for the South Amboy Parade. To register to participate or for more information, visit www.southamboyparade.com

Suzanne Russell is a breaking news reporter for MyCentralJersey.com covering crime, the courts and other mayhem. To get unlimited access, please subscribe or activate your digital account today.