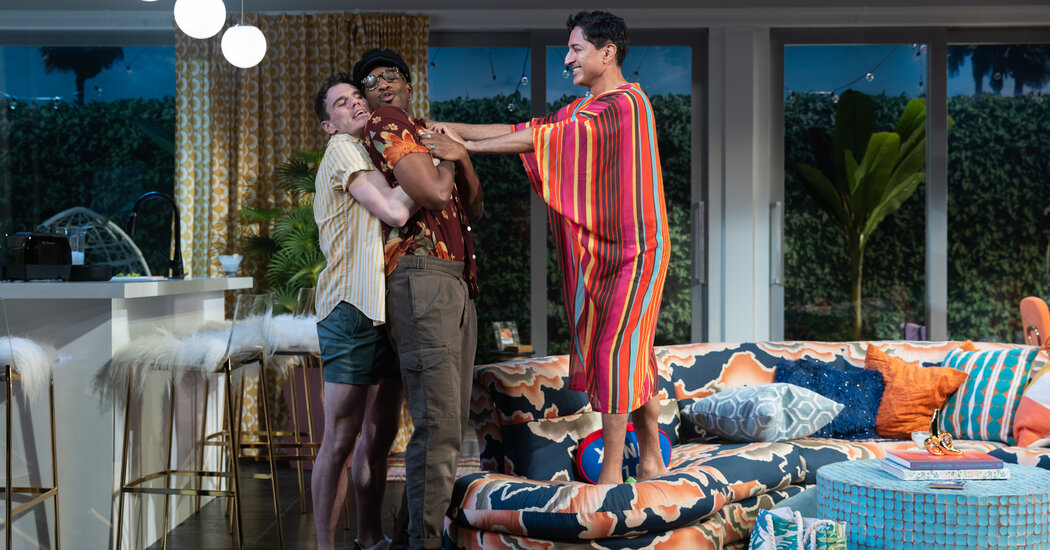 Review: “To My Girls”, a toast to the “Instagays” of the millennium

They don’t seem to like each other very much, these three gay tops spending the weekend together in a tacky Airbnb in Palm Springs.

Castor, an Asian-American writer who works as a shift manager at a Starbucks in Sherman Oaks, doesn’t want to cohabit with Leo, a black “queer theory queen” with whom, on a previous vacation, he slept. argued over marriage equality.

He and Leo agree, however, that Curtis, a bond dog with cheese-grater abs, is an irredeemable narcissist, unable to limit his buff privilege for more than 30 seconds no matter how many times he has it. called.

Curtis just wants everyone to have a good time, as long as it’s on his own terms. He treats Leo as a lucky charm and Castor as a cushion: comforting and disposable. His loyalty goes to his Instagram followers.

If this round robin of enemy fire reminds you of “The Boys in the Band,” Mart Crowley’s 1968 play about mean, self-hating homosexuals a year before Stonewall, you’re not far off. JC Lee’s muddled new comedy, “To My Girls,” which debuted Tuesday in a Second Stage Theater production, functions in part as a millennial update to the earlier, much sharper work. Call it “The Boys in the Sand,” set not at the dawn of liberation, but at its dusk, eyes wide shut.

Like Crowley’s play, “To My Girls” brings together a group of thirtysomethings – Castor (Maulik Pancholy), Leo (Britton Smith), Curtis (Jay Armstrong Johnson) and a fourth who arrives later – in a safe space where they can be themselves. The space here isn’t a mod Greenwich Village apartment, but a mid-century bungalow brimming with glitzy accents that create what one character calls a “Jonathan Adler aesthetic.” (The eye-straining piece and faux palm trees outside are by Arnulfo Maldonado; the desert glare and wavy reflections by Jen Schriever.)

“To My Girls” also echoes “The Boys in the Band” by providing contrast with the central characters bickering and involving themselves with two strangers: Bernie (Bryan Batt), the gay Republican from a sixties who owns Airbnb, and Omar (Noah J. Ricketts), a happy hottie in her twenties whom Beaver picks up from a bar. To Omar, no less than Bernie, the others look like weird exhibits in an unnatural history museum.

This effect is apparently what Lee wants. “Imagine the future archaeologist who has to sort through social media to write his thesis on millennial queens,” says Leo, not thrilled with what he assumes the archaeologist is about to conclude.

If “To My Girls” is a first draft of this thesis, it is not convincing; his arguments, which are little more than jokes, go in too many directions. Do “Instagays” posing “topless with quotes from Maya Angelou as a caption” signal, as Castor suggests, the death knell of fabulous queerness? Or, as Leo argues, is heteronormativity the poison? Or, as the play itself seems to demonstrate, is everything really okay?

Lee, whose 2013 piece “Luce” is as tight as this one is aimless, seems to want to do it all. Social media and conformity may be killing gay culture, but everyone happily participates in the music video Curtis makes to get more followers. It’s the most joyful thing on the show: a synchronized dance to the Pussycat Dolls’ song “When I Grow Up,” performed in heels, wigs and sheer floral-print caftans. (The costumes, and lack thereof, are by Sarafina Bush.)

“I wanna be famous / I wanna be a star,” they lip-sync without irony.

The fact that the routine has to pass as one of the highlights of the play is part of the problem, indicating how little else happens. Yes, one character sleeps with another, upsetting a third, but not much comes of it. The political and generational arguments, not exactly fresh in the first place, don’t change their minds, perhaps because, like in “The Boys in the Band,” everyone is blitzed within minutes of arriving. (The title of the piece is a toast.) What the high-octane margaritas do for the characters, the fast rhythms of the writing do for the drama: decouple action from reaction. Opportunism is everything.

When the jokes are good enough, it’s confusing in small doses. Castor, analogous to Harold, the “ugly, pockmarked Jewish fairy” in “The Boys in the Band,” gets the best lines, often at his expense — and Pancholy sells them well. In the play’s most compelling scene, with Ricketts’ witty Omar, you can see Castor breaking out of his self-loathing old self for something new, even if you wonder if he’s ever done it, maybe -be several times, and came back.

While this scene’s setup isn’t believable and it’s only five or six minutes long, I could have watched an entire play that turned its clever observations into meaningful character-altering conflict. Unfortunately, the actual coin disposes of such moments instantaneously, and therefore, under the direction of Stephen Brackett, has no cumulative power. By the end, everyone is basically where they started, except for the hangover. You have no doubt that another weekend in a few years would go the same way.

That’s not how life is – and certainly not how it is in gay life. The change has been so big and rampant since “The Boys in the Band” that you can barely tell the backlash from the earlier ones. Even a comedy should acknowledge this, as Drew Droege did in “Bright Colors and Bold Patterns” and “Happy Birthday Doug,” a pair of searing one-man shows about those left maimed on the tracks as the locomotive advance gay rights.

No one is maimed, or even very moved, in “To My Girls,” a play that asks gay people to “protect the fire that keeps you burning” but never shows what the fire is made of. Tequila, maybe?

To my daughters
Through April 24 at the Tony Kiser Theatre, Manhattan; 2st.com. Duration: 1h30.

How the ‘How Bizarre’ singer’s son is coping with depression