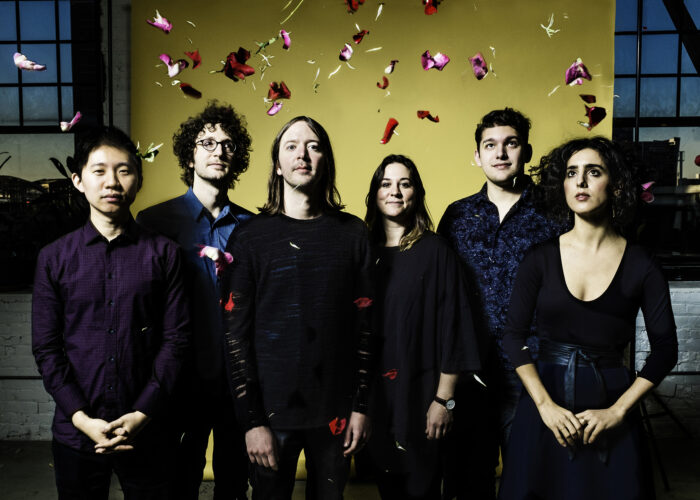 Review: Create a way for musicians to play together on Zoom

Something musicians quickly discovered once the COVID lockdown was in place for real was that Zoom and similar technology – so often aggravatingly indispensable for work, school and family gatherings – were more or less useless for group performances. Microscopic time shifts that pose little to no problem in conversation have proven insurmountable for musicians trying to keep a beat.

Brooklyn-based composer Judd Greenstein therefore found an artistic workaround: He wrote some of the music that didn’t require performers to adhere to a strict time. Then he took it a step further and built an entire piece around that dynamic.

The result, “Together”, is both beautiful and empowering, an elegant 15-minute sequence of pure sonic pleasure that also comments – wisely and lightly – on the terms of its own creation. It appeared as the culmination of a short, dynamic concert at Hertz Hall in Berkeley on Friday, April 8, by New York contemporary music sextet yMusic.

There is a recognizable aesthetic character to all of the ensemble’s undertakings, which include performances of music written by fellow composers as well as short, snappy pieces co-created by band members.

It’s music that draws on ingrained memories of minimalism, rock and neoclassicism to forge a world of vibrant sonic colors and deft rhythmic structures. There are repeated grooves and melodic effects that speak of rich joy. The public is always kept informed; listener enjoyment is a primary concern.

Sometimes the music that emerges can feel a bit thin, as if the bar has been set too low and once reached, we can all go home. Friday’s schedule, presented by Cal Performances, included stretches that looked enjoyable but oddly unambitious.

However, listening to “Together” had to be reminded of how much can be achieved in this sonic world. In the initial establishing sections, Greenstein sets up a collection of distinctive musical worlds, one for each instrumentalist – a rapid flourish for the flute like the song of a fantastical nightingale, harmonically exploratory figures for the strings, and so on.

Each piece of musical material occupies its own harmonic and rhythmic space, not dependent on anyone else but not entirely isolated either. The gestures interact in a loosely connected way. Everyone is, as the saying goes, a mood.

And then, with subtle but sure candor, Greenstein brings them together for the sequel. The rhythms are more and more shared; the harmonies allude to each other. “Listen to this”, do you think, “they play whole” – and suddenly a musical attribute that always seemed like a basic requirement starts to look like a radiant achievement.

The rewards of the rest of the evening were authentic but more evanescent. “Tessellations,” by Berkeley-born composer Gabriella Smith, features layered rhythmic patterns — begun by the cellist tapping a catchy beat across the body of the instrument — that shimmer and change seductively, like something from the op 60s art. But after four minutes – just when the listener is ready to build something on that – Smith abruptly fades away.

In “Ecstatic Science,” composer Missy Mazzoli constructs dense harmonies that slip their moorings unpredictably without losing cohesion, like a musical lava lamp. Andrew Norman’s ‘Difference’, which took up the second half of the evening, focuses on single notes, comparing their sounds and later their precise pitches as if examining a series of paint samples. The set’s four short compositions, wordless pop songs, boasted a polished improvisational feel.

What ran through the concert consistently was the skillful and careful virtuosity of the playing. Like any successful ensemble, yMusic is both a vehicle for the thoughts of other composers and a powerful creative force in its own right.

In court and in the sky, tribe continues to challenge Line 3 pipeline