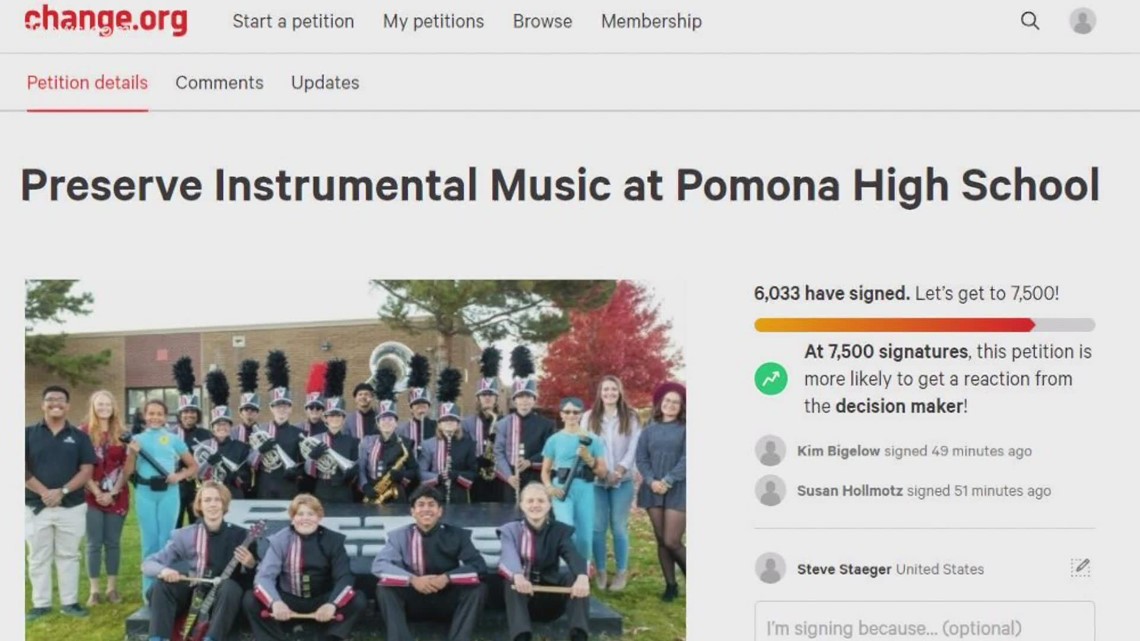 Pomona High School was once known as a regional powerhouse for instrumental music. Now the school plans to cut the only full-time music teacher next year.

ARVADA, Colo. — Current students and alumni plan to protest Pomona High School administrators’ decision to cut a full-time instrumental music teacher for the next school year, after more than 6,000 people signed a online petition to keep the position.

Students at the school, once known as a powerhouse in the Denver metro area for instrumental music programs, created the petition after hearing the news Friday before they left for spring break. Until monday, the petition had been shared by dozens of people online and sent to local media.

“On Fridays we were told it was orchestra class and when we were rehearsing some of our music we were all crying as we played,” said Erin McGovern, a Pomona senior who is the lead violist. of the school chamber orchestra.

“In preparation for the 2022-2023 school year, the school leadership team is aligning teachers and support to meet all student course requests, including requests for instrumental music electives and high quality voice,” a spokesperson wrote in an email.

“Student course selection requests inform staffing decisions at the school, especially when it comes to elective courses. Based on Pomona High School student selections, a full-time instrumental and vocal teacher was not warranted for the 2022-2023 school year. Students who have enrolled in instrumental and vocal music classes will have the opportunity to take these classes taught by excellent music teachers spread across multiple school campuses.

But the decision is already prompting some incoming students to reconsider whether to attend Pomona in the fall.

14-year-old Jack Ferguson started playing the cello in fifth grade. He was excited to attend Pomona in the fall, eager to audition for the school’s chamber orchestra. Now he says he may have to transfer and leave his friends if he wants to pursue his dream of becoming a professional cellist.

“I was a little sad to have to choose between friends and the cello,” he said.

His mother, Amy Ferguson, is one of 6,000 people who signed the petition over the weekend.

“The arts community takes a hit and they always take a bit of a hit when it’s time to cut programs,” she said.

“He was always drawn to music,” Ferguson said of his son. “And I feel like he’s kind of shy, but I feel like he expresses himself through music.”

McGovern, who won’t be affected by the changes since graduating in the fall, said she was organizing a protest in a bid to make sure the friends she leaves behind still have their choices. beloved.

She disputes the school district’s assertion that enough students are not taking the band’s electives to require a full-time staff member. McGovern said she’s seen the group grow in recent years and class schedules are creating a barrier.

She hopes the community will step in to offer help.

“We’ve had donations made on our gym and everywhere else by the community,” McGovern said. “And we know they would be willing to do the same for the band and the orchestra, and nobody really asked.”

RELATED: Teacher Thinks Bringing Music to Life Can Be an ‘Equalizer’

SUGGESTED VIDEOS: Full Episodes of Next with Kyle Clark

Nj Payday Loan Providers: Who Are They?