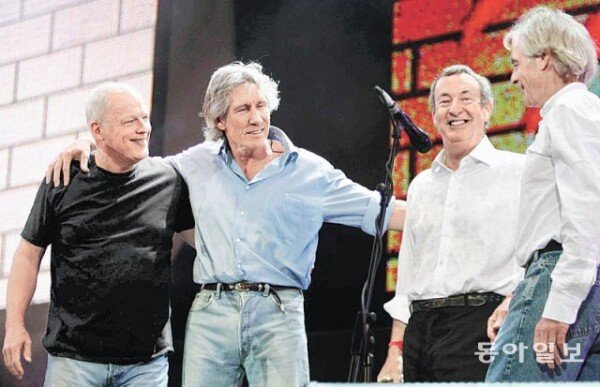 Pink Floyd come together to support Ukraine: The DONG-A ILBO

Legendary British rock band Pink Floyd have come together in 28 years to support Ukraine. According to The Guardian and The Associated Press, Floyd founding members David Gilmour and Nick Mason released the band’s new single, “Hey Hey Rise Up” on Thursday (local time). The two members were joined by the band’s longtime bassist since the 2000s, producer Guy Pratt, songwriter Nitin Sawhney and Gala, the daughter of late Floyd member Rick Wrigh.

The new song sampled a Ukrainian folk song that Andriy Khlyvnyuk, leader of Ukrainian rock band BoomBox, posted on his Instagram account immediately after Russia invaded Ukraine. Khlyvnyuk, who performed with Gilmore in London in 2015, recently sang a folk song outside Saint Sophia’s Cathedral in kyiv to honor Ukrainian forces. Pink Floyd plans to donate proceeds from the new single to support Ukraine.

In an interview with The Guardian, Gilmore said he thought he could do something about it after seeing Khlyvnyuk’s video. “It is truly difficult and frustrating to see this extraordinarily insane and unjust attack by a great power against an independent, peaceful and democratic nation,” Gilmore said, adding that her grandchildren are half-Ukrainian because her daughter-in-law is Ukrainian.

Formed in London in 1965, Pink Floyd built a dedicated fandom through social messaging and unique songs using various instruments. The group was praised for pioneering the era of “progressive rock” in the 1960s and 1970s.

Josh Ramsay Does Big Reality ‘Show’ On His 18-Song Debut

A powerful weapon in Britain’s ‘dirty war’ in Northern Ireland