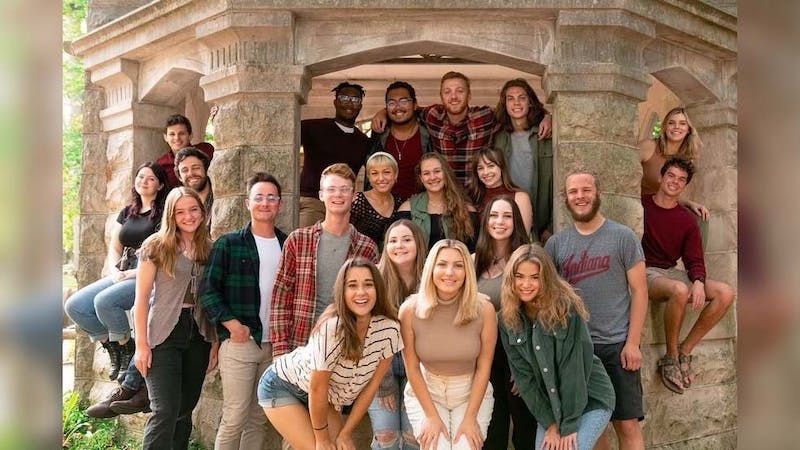 RPF’s cover of BØRNS’ “Electric Love” will be released next month, Hambrook said.

All of the songs on the album are covers, but Hambrook said many of them were arranged by members of the RPF. Some are group arrangements, and individual members have also arranged pieces.

“There’s a lot of collaboration involved in making an album,” Hambrook said. “But if you want to try arranging or composing something, that’s also an option.”

The album will feature many different genres. Hambrook said they like to try different styles to see what works with the band.

Hambrook, an IU senior, said she had a musical background in high school but was hesitant to join a band in college. Her friend encouraged her to audition, she said, and she has now been involved with the band for 4 years.

The a cappella group rehearses twice a week for two hours each. Hambrook says it’s a time commitment, but she’s happy to do it.

Hambrook said his favorite element of this project was the studio recording. She said she was especially thrilled to hear their finished work. Their cover of “Electric Love” and the finished album will be available on streaming platforms such as Spotify, Hambrook said.

Jackie Bobos, a sophomore at IU and musical director of RPF, joined the group last semester after seeing flyers on campus. She said the group is like a family.

“It’s been a while since I’ve been part of something where everyone is really passionate about what they do, but everyone is also great fun to hang out with,” Bobos said. “They’re my core group of friends, and they’re also the people I come together with to do something we all love.”

Bobos said one of his favorite songs on the eight-song album is “Electric Love.” She said her other favorite is a mashup of Adele’s “Make You Feel My Love” and Coldplay’s “Yellow.”

After attending a smaller high school, Bobos said the ability to produce this album was something she never expected.