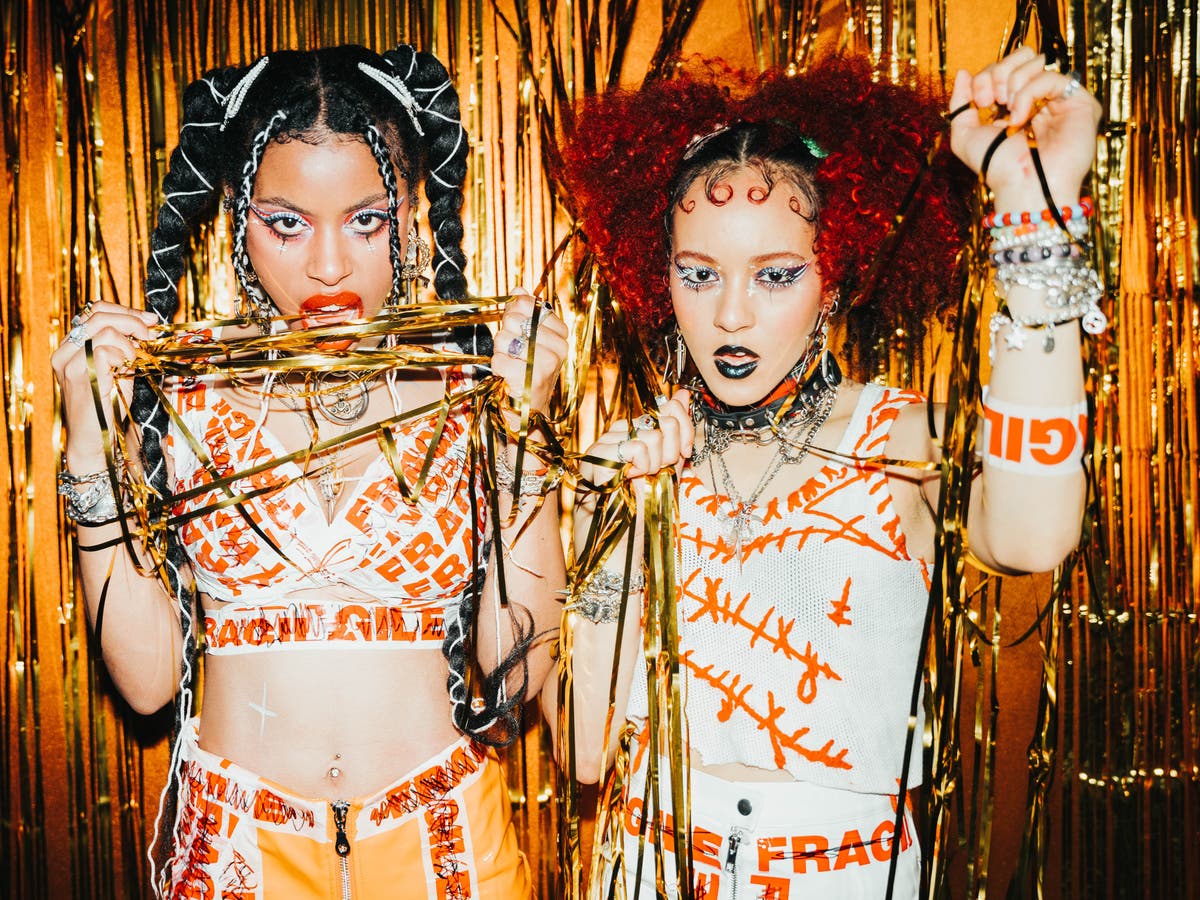 Interview Nova Twins: “We have to make room for new bands, otherwise rock will die”

The Nova Twins are just minutes away from their sold-out show at The Echo in Los Angeles when a circular pit opens up in the heart of the pogo crowd. You would never guess that tonight is the first time the rising stars of British alternative rock have played a note in this city. The duo’s neon-hued DIY future-punk aesthetic is reflected in a sea of ​​elaborately dressed fans who know every word to every song. Onstage, bassist Georgia South nods to an explosion of bright red curls as she unleashes a groove that shakes sweat off the walls. Next to her, guitarist and vocalist Amy Love leads a righteous call and response. “It’s my body!” It’s my mind! she screams, and the response comes straight from the dedicated audience: “Do what I want with it!

The provocative energy crackling through the packed house isn’t just due to the strong, proud, genre-blending sound the duo have arrived at by fusing hardcore rock, punk, metal and rap. It’s also a product of the open-hearted community the Nova Twins have built around them since they started playing together eight years ago. Signs posted around the site indicate exactly what they represent. “Nova Twins: we are pros of love and respect!” they read. “No harassment. No racism. No homophobia. No transphobia. No xenophobia. No ableism.

This fervent belief in the power of inclusivity is just one of the ways Love and South are redefining what it means to be a rock star in 2022. When I meet the couple for a fried lunch at the rock ‘n’ roll The Rainbow Bar and Grill on Los Angeles’ Sunset Strip, they explain they don’t have time for cliched group postures. “Sometimes you see people who are a little too cool for school,” says Love, an outgoing singer whose brand of cool is as laid-back as it is chic. She offers a sneering impersonation to illustrate her point: “‘We’re fucking rock stars, and we don’t give a damn,'” she says. “Being a rock star isn’t about putting up a weird facade.” The pair have a knack for finishing each other’s sentences, and South, the quieter of the two, picks up Love’s train of thought. “I feel like it’s not cool anymore,” she says. “At the time they were here to do this, but now you look like an ad**k. It’s cooler to be nice.

Love and South have been friends since they were teenagers. They met when Love moved from Essex to London and quickly became regulars at rock, metal and punk gigs in the capital. The title of their exhilarating debut album of 2020, Who are the girls?, was inspired by the constant refrain they heard at concerts where they were often the only women of color in the room. The diverse crowd that came to see their first show in Los Angeles shows they’re already changing that, but South says they’re just getting started. “Our philosophy is: ‘we are not enough’,” she says. “It’s not enough when we’re the only women of color on a festival stage. That’s been the case so often. We can’t just be the token group that means ‘you’ve done your part’. We want leave the door wide open and get things done.

It’s a tough time to be a young avant-garde rock band. Recent to research by music analysis firm MRC Data shows that 70% of songs listened to in America are at least 18 months old, with most being much older than that. This statistic is reflected in festival lineups dominated by legacy artists and bands that are nominated for major awards. “Look at the Grammys this year!” recalls love. “Nominations in the rock category were AC/DC, Chris Cornell, Foo Fighters…all male, and no one new.” Cornell, it should be noted, has also been dead for half a decade. “We get annoyed when the same headliners go on and on,” she continues. “They definitely should be there, but you have to make room for new bands or rock will die with the people on stage.”

All is not gloomy however. The pair name a host of heavyweight and girly actors like Yonaka, Cassyette, Meet Me At The Altar and Dream Wife as representatives of an emerging underground rock scene, and say they were pleasantly surprised to find themselves to make inroads into the mainstream. . “We have just been put on a playlist on Radio 1!” Love said enthusiastically. “This would never have happened a few years ago.” South sees signs of renewed interest in the genre. “I think rock is coming back to the UK,” she says. “You can hear heavy bands on the radio again.”

Over the past few months, listeners to BBC Radio 1 and beyond have been treated to a series of Nova Twins singles that have blasted the airwaves: ‘Cleopatra’, ‘Antagonist’, ‘KMB’. and “Puzzles”. They are all taken from the band’s second album Supernova, on June 17, which they started writing at the start of the lockdown, after seeing everything they were working on come to an unexpected halt. “The album was born out of a feeling of, ‘What just happened?’ says Love. “We were like: our career just stopped. Everything just stopped. We watched it all on Netflix. Let’s write. It was then that G sent the foundation of “Cleopatra”. »

At the time, Love and South were physically separated, with Love living in Hastings and South still in London. “I thought it would be cool if the song connected us,” South says. “Amy is half Iranian and half Nigerian, I’m half Jamaican and English, so I wanted to put all of that into the music. The chorus riff is quite Middle Eastern, and then you have a hip-hop influence on the verses. I thought it would be cool to mix these cultures. Lyrically, Love was inspired by her experiences during the Black Lives Matter protests. “It was a pretty intense time for us emotionally,” Love says. “Georgia went to the London BLM marches and we both went to the Hastings march. London was really diverse and huge whereas Hastings was much whiter, but it was nice to see the unity there. It was nice to see people who are not black. “Cleopatra” has become a celebration of that unity and being proud of where you come from in an inclusive way.

While most of the album was written remotely, the towering single “Antagonist” didn’t emerge until they were finally able to play together in the same room again. “It was our first time dating after being separated,” South recalled. “The whole solo and instrumental at the end of the song, we avoided that first demo. It just captured a vibe, so why try to recreate every little lick?”

It’s a neat encapsulation of the pair’s brutal approach to music, and everything in between. “We’re very handy, and everything we do is an extension of that,” says South. “We’ll paint our own sets, we’ll do all our own clothes, and we’ll do all the music, obviously. This is where we put all our passion. Love picks up the thread. “It comes from the fact that we felt obligated to do it,” she says. “If you don’t have millions of dollars or someone to fund you, you have to be a little more resourceful. A music video doesn’t have to cost $50,000. Doing something yourself is more unique and personal. You get a kind of individuality in the art, that’s what we appreciate.

They are not the only ones. At a time when so much music seems to be about rearranging the past, the Nova Twins are forging their way to a brighter future of their own design. “We’re creating a world, you know what I mean? says Love, and it’s a place where even rock stars know it’s cool to be nice.

Foals’ Yannis Philippakis: ‘We were broke, we were having fun, you could…