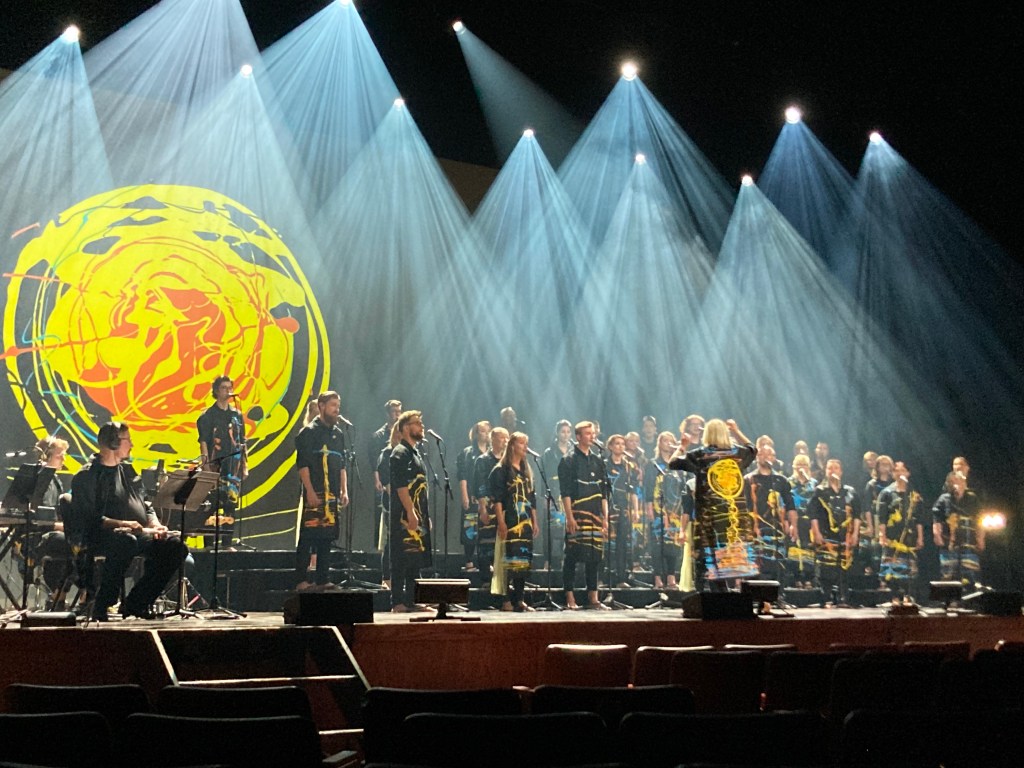 The Ordway Center for the Performing Arts turned into a seaside setting for a concert by Latvian choral and instrumental group Anima on Friday night.

The group is based in the town of Saulkrasti, on the coast of the Gulf of Riga, part of the Baltic Sea. In 2021 they filmed a performance of “Enchanted by the Sea”, composed by Kristaps Krievkalns, with poetry by Kārlis Kazāks, on Saulkrasti beach, and footage from this concert was shown at the Ordway for the indoor performance.

As the choir and musicians performed, dressed in black robes with colorful graphics depicting an abstract bright sun shining over the sea, the audience could often see a video of the same choir singing on the sand in the evening, with the Gulf of Riga in background. The video as well as the music, which took a sea voyage from dusk to dawn, had the effect of bringing a bit of the beauty of Latvia to St. Paul.

It’s a bit like the idea of XV Festival of Latvian Songs and Dances, which has been running since Friday in downtown St. Paul, continuing through July 4. The American festival, held for the first time in Minnesota, offers a glimpse of cultural traditions and new innovations coming from Latvia and the Latvian diaspora.

The choir was led by conductor, artistic director and producer Laura Leontjefa. Lively and expressive, Leontjefa used her whole body to guide the music. She also danced, just like the singers. With her windswept blonde hair, Leontjefa took the concert to a place between ritual and beach party. She even sang a solo, showing off her vocal chops in addition to her visceral understanding of music.

Like the singers, Leontjefa was barefoot for the performance. At first, she and the other singers strolled onstage as if they were strolling by the seaside. They smiled at audience members, creating a sense of togetherness that everyone was a part of.

Anima’s singers had a classic choral sound, their voices blending into warm harmonies, Krievkalns’ compositions, on the other hand, weaved together melodies that sounded contemporary and ethereal with hints of folk music. There were also sounds of the waves incorporated into the sound score, and Andis Klučnieks often introduced the call of the wind into his flute playing.

When the concert opened, the instrumentalists almost overpowered the singers, who all had microphones. As the story of the song cycle progressed, traveling through the setting sun, into the stars of the night, the waves, the storms and the reflections of the morning, it became clear that there were specific times when vocal sounds and instruments changed in prominence, depending on the mood evoked for the particular subject. song.

Overall, Krievkalns’ compositions were quite varied. From luscious a cappella pieces where the voices soared, to rhythmic explorations that made great use of staccato and rests, the concert created a dramatic array of textures. Some of the songs were pretty edgy – like “Smiltis” (Sand). There was a weird synthesized element layered into the song. Others, like “Vētra” (Storm) went all out with powerful, booming percussion and explosive lighting.

Often the most impactful moments were of reflection, with the 40 or so singers filling the Ordway with their voices.