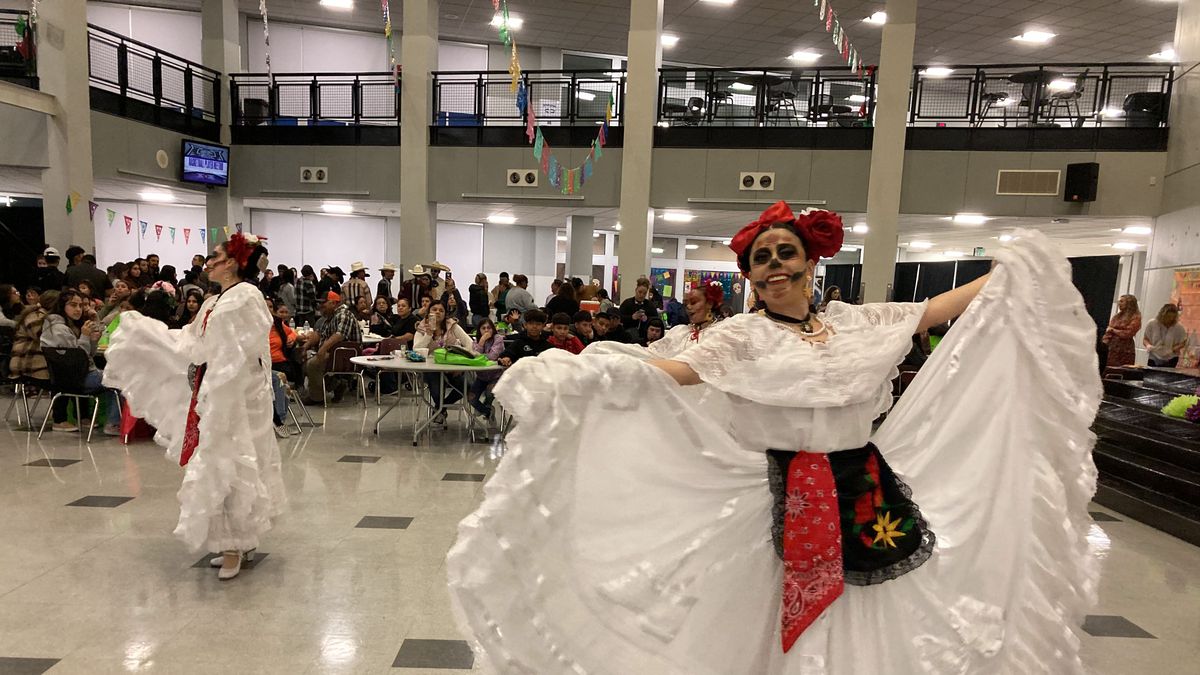 Five years ago, Omar Medina helped organize a Día de los Muertos celebration at Hermiston High School that drew around 80 people. Organizers of the Día 2022 celebration could say all was well when they ran out of tamales designed to feed 400 people.

Under the fluorescent lights of the common area of ​​Hermiston High School, Wednesday’s event had all the usual contrasts of the Mexican Day of the Dead.

The black mourning garments were contrasted with vibrant flowers and embroidery. Visitors’ skull face painting was set against the backdrop of the brightly colored papel picado hanging from the ceiling. Faded family photos and lit candles for deceased loved ones during the ofrenda were accompanied by music and dancing.

The event was officially dedicated to those who died from COVID-19, a virus that hit Latinos in Umatilla County hard, especially early in the pandemic.

“We are such a big part of this community and celebrate that,” she said. “Let’s get together. We know our people like to get together, celebrate and have a good time; the atmosphere.

To organize the celebration, Oregon Rural Action partnered with Euvalcree, a nonprofit that serves Latinos and other underrepresented communities with offices in Ontario and Hermiston. Marisa Mendoza, regional operational director for Euvalcree, said her organization was already considering hosting a similar event when the two groups started talking.

“I think it lets them know that their memories are still alive and that we will forever remember what happened and they are not forgotten,” she said of the event.

The event has grown to include more community organizations, like Oregon Human Development Corp. and the Eastern Oregon Center for Independent Living. But students and staff at Hermiston High School have also become a key part of the program.

Sanchez said the two musical groups that performed at the event are students from Hermiston High School. Many of these students came from Juntos, a student group aimed at connecting young people with cultural events.

Medina, a Hermiston High social worker and Juntos counselor, said it was a learning opportunity.

“It was amazing to see and give students the opportunity to celebrate something like this and educate other students who have never even heard of Día de los Muertos, whether they are from Hispanic or not,” he said. “It’s just cool to learn and I’m still learning on the day too.”

Jacky Orozco, a Hermiston junior and vice president of Juntos, drew something from the joy expressed during Día de los Muertos.

“It also adds a positive light on death,” she said. “Instead of people feeling sad on this day, they can celebrate their past ancestors.”

Mendoza, the director of Euvalcree, said she lost a mother-in-law to COVID and Sanchez said her 30-year-old cousin contracted the virus just before her family was about to celebrate the 100th birthday of his grandfather. The cousin died after being put on a ventilator.

“It was really hard on everyone because it shouldn’t be like this,” she said. “No one should have to put their child to rest.”

Sanchez said it motivated her to keep going the organization’s vaccination efforts with the local Latino community. The state credits the efforts of these types of organizations with closing the vaccination gap between whites and Latinos in Oregon.

Organizers of the Día de los Muertos event hoped to create a gathering where Latino residents could feel comfortable. The event took place in a town where the Latino influence is just beginning to match the raw population numbers and seep into some of Hermiston’s newer traditions. The city hosts one of the largest Cinco de Mayo events in the region, and Latinos are becoming a more empowered voice in decision-making.

When the Hermiston School Board came close to naming an all-white school board in a district where about two-thirds of students are Hispanic or Latino, school staff and members of the public openly criticized the decision. The board eventually filled the vacancy with a member of the Latina community.

With the tamales sold out on Wednesday and the makeup line declining, organizers started thinking about next year. With success already apparent, they said they would like to see the Hermiston Día de los Muertos become an annual event.