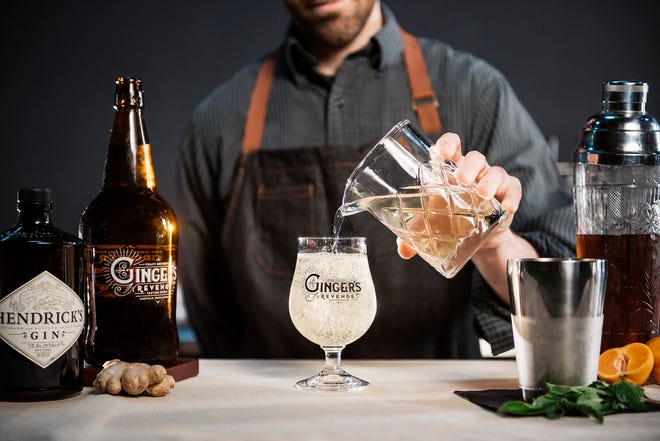 Ginger’s Revenge will open at 32 Banks Avenue in the South Slope neighborhood of Asheville, tentatively in late August. This will be the second location for the ginger beer trade.

In 2017, Ginger’s Revenge opened at 829 Riverside Drive in North Asheville.

Cristina Hall Ackley, co-founder and president, said she and her husband and CEO, David, had the idea of ​​expansion in mind for some time. Yet they expected it to happen later. After Werhloom Honey and Meadery closed its Asheville tasting room this summer, entrepreneurs seized the opportunity to make it their own.

“We had been keeping our eye on real estate. It was something we thought was more of a 2023 project, but this opportunity became available, and it was just the right time,” Ackley said.

Read it:Asheville Brewery is getting into the distillery, serving whiskey, rum and more

Previously:Why some bars nix memberships while others enjoy the process

We can expect more from the ginger beer brewery when the second space opens.

The South Slope location will allow the ginger beer business to show off its versatility.

“A second location gives us the opportunity to expand our brand offerings and experiment with new product ideas,” David Ackley said in a press release. “We look forward to leveraging Ginger’s Revenge customer experience to bring something unique to the South Slope.”

It’s designed to encompass a lounge vibe and to have more room and options for drinks.

“We will definitely still have live music and community events and probably even more than our current location, as we anticipate the South Slope Lounge will have more of that cocktail bar, a very relaxing lounge vibe,” Cristina Hall Ackley said. .

The Ginger’s Revenge brand is an illustrated rock band with bandleader and drummer Ginger representing the original ginger beer. At the South Slope, guitarist and singer Lime Agave will have time to shine as inspiration for the living room decor.

“When we opened our first site, it was just David and me. It was just the two of us trying to do things,” Cristina Hall Ackley said. “Now we have a team of over 20 people. Our front desk team is really helping lead the dining aesthetic and experience in the new location, which is really cool to see and be a part of. “

Seventeen taps will be stocked with an assortment of alcoholic and gluten-free ginger beers and exclusive small-batch selections, as well as non-alcoholic ginger beers. Ginger’s Revenge’s flagship tasting room on Riverside Drive has eight taps.

“We’re excited to have more tap real estate to try out new ginger beer flavors, to have some of our house non-alcoholic options on tap,” she said. “It’s always been important for us to provide those options here because we have a lot of friends and people who don’t drink.”

Ginger’s Revenge signature products are the Original Ginger Ale, Hibiscus Lavender, Lime Agave and Cranberry Herb, plus a rotating seasonal selection. The brewers’ recipes are made up of almost 95% organic ingredients.

A change in state liquor laws that went into effect in July will allow the brewery to serve draft cocktails that showcase the many uses of ginger beer, it said. she declared.

Soft drinks and traditional beer from guest breweries will also be available.

The new facility spans 2,500 square feet and is adjacent to numerous breweries, bars, restaurants, shops and entertainment venues. Entrances to the Ginger Beer Tasting Room will be accessible from Banks Avenue between Catawba Brewing and Buxton Hall BBQ, and from Buxton Avenue behind Green Man Brewery’s Dirty Jack’s.

Visit our past:Ramsey’s lectures in 1962 served history with a taste of play

In the Riverside Drive Tasting Room, patrons can continue to visit the bar to catch a live music performance or stop by for community events held weekly.

This year, Ginger’s Revenge’s production and warehouse space expanded by 3,600 square feet – or almost 50% – when commercial space became available next to the brewery’s flagship location. artisanal, which is inside RAMP Studios, she said.

“We felt like it was a good strategic move and we are slowly growing in this space,” Cristina Hall Ackley said. “We will eventually build another cold room here. But it’s really helpful to have this space right next to our existing space instead of having a warehouse 20 miles away.”

Opening at the end of August

Tiana Kennell is a food and gastronomy reporter for the Asheville Citizen Times, part of the USA Today Network. Email her at [email protected] or follow her on Twitter/Instagram @PrincessOfPage. Help support this kind of journalism by subscribing to the Citizen Times.