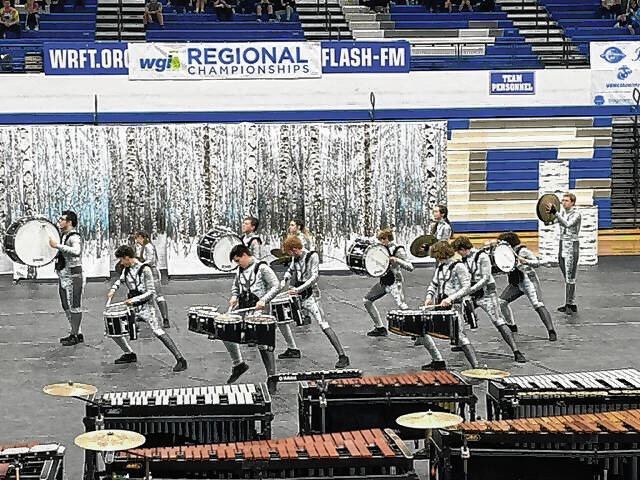 The ensemble qualified for the Open Scholastic Percussion Finals for only the second time in school history, competing against 40 schools from 15 states.

The competition took place April 21-23 in Dayton, Ohio, where more than 33,000 students competed regionally and 16,000 qualified for the finals.

Greenfield-Central was the smallest of 15 schools to qualify for the percussion final, by a margin of 300 students.

“I’m very proud of this band,” said Jeremy Turner, one of the school’s band directors.

“We are incredibly proud of all of our students who have been working since December on what they have been able to accomplish,” Turner said.

Michelle Willits, whose son Peyton Willits, 16, plays xylophone in the percussion ensemble, said the World Finals competition was as exciting for parents as it was for the students performing.

“All of these kids put so much into every show. It’s really cool to watch,” said the proud mother, who cries when she thinks of the level of dedication it takes to put on such a top notch performance.

“I’m so proud of these kids because they work so hard throughout the year,” she said. “They put so many hours into putting these shows together, and they love performing so much. Reaching the World Finals is just the icing on the cake.

Willits, whose eldest son played in the school band before graduating last year, recalls how difficult it was for the band members when they weren’t able to compete for a year or two due to COVID.

“When they started up again, my son (Peyton) said, ‘Now I remember why I like it so much,'” she said.

Willits said his son’s time in the band instilled in him such a passion for performance that the high school student planned to major in musical performance in college.

“This program has really taught her and many other band members that their passion for music can go far beyond high school,” she said.