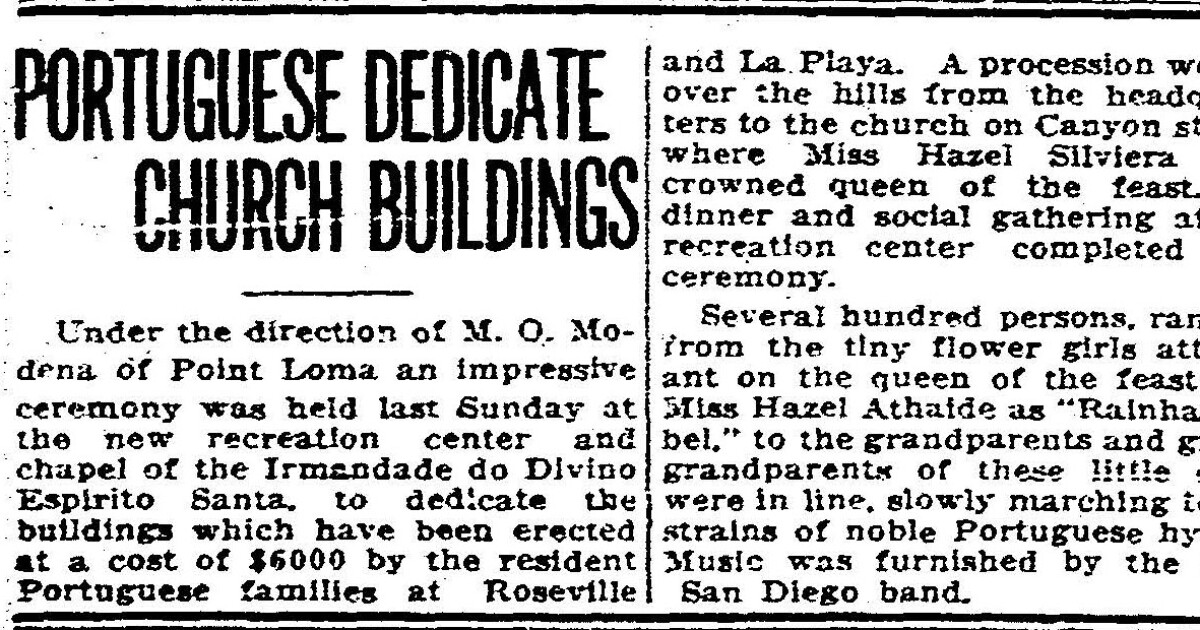 Extract from the archives: the Portuguese chapel of Point Loma was built in 1922 to contain the crown of the Holy Spirit

For a century, the Portuguese community in San Diego has celebrated the Festa do Divino Espírito Santo, or Feast of the Holy Spirit, with a procession ending at the small white-framed Portuguese chapel, or capela, built in 1922 next to the Portuguese room at the foot of Addison Street. This year’s celebration took place from June 3-5.

Under the direction of MO Modena of Point Loma, an impressive ceremony was held last Sunday at the new Recreation Center and Chapel of the Irmandade do Divino Espírito Santa, to dedicate the buildings that were erected at a cost of $6,000 per Portuguese families residing in Roseville and La Playa. A procession proceeded up the hills from the seat to Canyon Street Church, where Miss Hazel Silviera was crowned queen of the feast. A dinner and social gathering at the recreation center completed the ceremony.

Several hundred people ranging from the tiny flower girls who accompanied the feat queen and Miss Hazel Athaide as “Rainha Izabel”, to the grandparents and great-grandparents of these little ones, lined up, walking slowly to the strains of noble Portuguese hymns. Music was provided by the East San Diego band.

When Queen Isabella of Portugal sold her jewelry at the end of the 13th century to provide funds to feed the people of a war-torn nation and took the lead in the rehabilitation of her country, it was an opportunity to rejoice. For the next 400 years, the event was celebrated by Portuguese people all over the world.

Yesterday, the Portuguese colony of San Diego, White Sunday, celebrated its fiesta Sociedade Espirito Santo with a large colorful mass at the Church of Saint Agnes and a party.

More than an hour before the 11 a.m. services, the procession began to form in front of the Roseville auditorium. Fourteen organizations with bands, corps of drums, drill crews, marching units and the party queen and her attendants made up the colorful parade that marched, with police escort, to St. Agnes.

The whole procession formed in front of Queen Mary Rosa and her attendants and the little queen, Lorraine Monise and her flowergirls who accompanied her.

More than 4,000 people lined the street as marchers marched under a canopy of brightly colored flags. As the procession broke up, the crowd crowded into the small church to attend high mass.

After the church service, formal ceremonies for the coronation of Queen Mary took place and she received the priest’s blessing.

Outside the church, the procession formed again and marched to the small chapel near the auditorium where the Queen’s crown was placed on the chapel altar. When Queen Mary entered the chapel, she was greeted by her father, Manuel Rosa, president of the feast and captain of the Lusitania, flagship of the feast, and her mother, Mrs. Maria Rosa, official hostess of the feast.

With the crown resting in the chapel, the Queen led the celebrants to a large outdoor pavilion for the feast, the final event of the feast.

Inside the pavilion, more than 4000 Portuguese and their families and friends were served. A brief entertainment program was chaired by Captain Rosa.

Yesterday’s celebration capped the annual party that kicked off Saturday night in the Portuguese colony with fireworks and dancing.

“It’s the biggest event the Portuguese have ever held in San Diego,” captain Rosa said. “Thanks to the many people who served on the party preparation committees and the hundreds of people who joined in the celebration, this year’s event was the most successful in our history here.