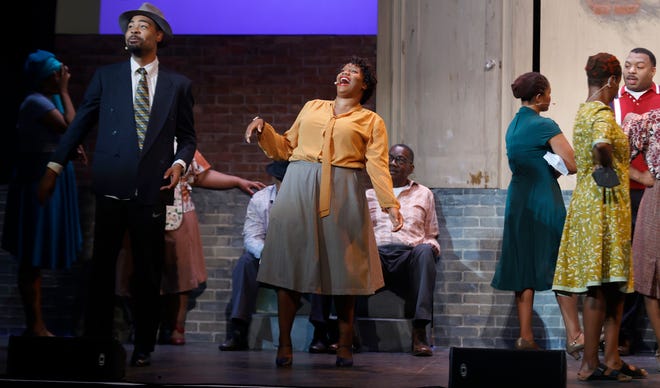 The Music Hall in downtown Detroit was buzzing. Piano and trumpet melodies ricocheted off the walls during the sound check as crew members polished a brick wall backdrop on stage. In the hour before their afternoon rehearsal, two days before opening night, these local artists were bringing a historic, dismantled neighborhood of Detroit to life – the focal point of their show.

On Thursday, the Plowshares Theater Company will present the world premiere of “Hastings Street,” a new musical centered on Detroit’s Black Bottom community, a historically segregated black neighborhood that was turned into a Lafayette Park housing estate in the 1950s, primarily for white residents. Set in 1949, the show follows the Carson family’s fight for their home and identity as the community is obliterated amid highway development and “urban renewal” initiatives.

More than 70 years after the neighborhood’s transformation, the Plowshares Theater Company, Michigan’s only professional African-American theater company, brings history to the stage. The show’s creators say its themes of displacement and cultural erasure remain relevant today.

“These communities have been erased, demolished, devastated, our people have been forced to move,” said John Sloan III, writer and co-creator of “Hastings Street.”

“Now in 2022, depending on what part of town you go to and who you ask, a lot of those same forces are at play.”

The creative team behind “Hastings Street” share a common passion for telling the story of Black Bottom. For director and producer Gary Anderson, it’s personal. He pitched the show’s concept, calling the story near and dear to his heart, as his wife was born in Black Bottom to parents who owned a boarding house that was wiped out along with the rest of the community.

“There’s a lot of exciting things about this show,” said Anderson, who is also the producing artistic director of Plowshares Theater Company. “I think it opened people’s eyes to the circumstances of development and how development is sometimes difficult for people of color. Invariably, in the history of this city, there has been a constant pattern of losers. Black Bottom was an example.

“Hastings Street,” which has been in the works since 2019, also marks Plowshares’ return to the stage, after the pandemic halted their production for more than two years. Not only is this the group’s first show, but Anderson hopes it will shape what the company stands for in the future.

Even in the exploration of the neighborhood’s unsettling demise, however, the show isn’t all dark and dark. No one wanted “another story of how the white man took advantage of black people,” Sloan said.

The creative team promises a heartfelt and fiery look at the family dynamics and colorful life of Detroit’s black community.

“A lot of the time, black history is often taught through the lens of oppression,” said musical director and co-creator Kris Johnson. “We wanted to tell a story based only on people who have a life like everyone else. Of course there is a tragedy that unfolds, but that is by no means the central point of musical comedy.

Detroit’s pride can be seen not only in the content of the show, but also in the way it was made. Anderson called the musical “the first original musical from black creators in this city in decades,” and said everyone involved in the production has moved or is from Detroit. It was an intentional choice by the creative team.

“We spend a lot of time bashing this city, its institutions and the individuals,” Anderson said. “They’re starting to think they can only be successful by leaving. Detroit has a plethora of talented artists, and we hope this show is proof of that. I know this show is proof of that. The talent who’s here needs to know they can do their best work here, they don’t have to leave.

After all, the story they tell can hit home close to home for many viewers.

Hastings Street will perform at the Music Hall Center for the Performing Arts, 350 Madison Ave. July 21-31. Tickets, starting at $29, are available at musichall.org.

The Van Halen tribute band arrives in Edwardsville on Friday