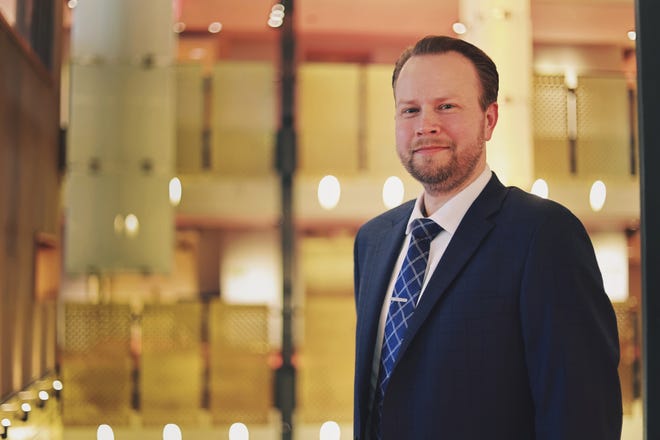 Ronmark, now DSO vice president and general manager, will replace longtime president Anne Parsons who announced in April his imminent retirement. Ronmark will assume the role on March 7, with Parsons remaining on board as Chairman Emeritus until November.

Ronmark’s appointment was revealed to musicians and staff on Wednesday evening at the DSO’s annual executive members meeting. His selection was approved in November by the board of directors, following a unanimous recommendation from a DSO search committee that screened more than 180 applicants from around the world.

The 44-year-old brings a blend of professional polish and approachable warmth, and he is highly regarded throughout the organization. Unlike many incoming leaders at large art institutions, he will take on the lead role with built-in familiarity and momentum: Ronmark has spent most of his career with the DSO, having started as a part-time assistant in the music library in 2005. He was appointed managing director eight years ago and became vice president three years later.

“One of the reasons it really interested me is the culture we have here. The musicians, staff and board are great people, and we have the most passionate supporters, ”said Ronmark. “It’s very attractive that I don’t have to learn people’s names. I certainly feel like I can run on the road.

In Ronmark, the DSO also has a leader who straddles the artistic and executive worlds. The classically trained Swedish native is a saxophonist whose own music businesses have included the New Music Detroit collective. He holds degrees in fine arts and musical performance from Northern State University and Bowling Green State University, as well as a doctorate in musical arts from the University of Michigan.

He was instrumental in the 2020 hiring of Music Director Jader Bignamini after conducting a two-year search, quickly discovering a close affinity and shared creative sensibility with the young Italian conductor. Together, the two have already started to shape their musical vision for the DSO, starting with the ongoing 2021-22 season and its presentation of various composers, new works and community programming alongside the traditional repertoire of the DSO. orchestra.

“I’m really, really happy, and I’m proud to continue working alongside Erik,” said Bignamini. “He’s incredibly talented, smart and hardworking. We work so well together and we have a lot of ideas for our future. He knows the business, but he also knows the culture of music and musicians. I’m so lucky to have it. I was hoping that would happen, and now we have it.

Ronmark said his relationship with Bignamini will be essential to his work as President of DSO – “supporting his vision, connecting him to this community and taking this orchestra to the next level.”

A committee to find Parsons’ replacement was formed almost a year ago, made up of board members, staff and musicians, and assisted by the Isaacson Miller Company. Led by Chairman of the Board Mark Davidoff and Director Emeritus Chacona Baugh, the group set several key traits they wanted in the new leader, including humility and “world-class” interpersonal skills, Davidoff said.

“It also needed to be someone who understood the human dimension of our work, from artistic excellence to education to how we serve the community,” said Davidoff. “Erik is someone who is already integrated into the orchestra. It includes our commitment to (diversity, equity and inclusion), innovation and excellence. He’s so prepared for it.

Following:DSO’s Jader Bignamini has been through the pandemic – now set to mark Detroit

Following:Anne Parsons, longtime president of the Detroit Symphony Orchestra, to retire in 2022

The original pool of over 180 prospects was eventually reduced to nine, who were interviewed for “two very intense days” at the Detroit Athletic Club, Davidoff said. Those candidates were reduced to three, with Ronmark becoming the unanimous choice of the research team. It was approved by the DSO Board of Directors on November 18.

During his tenure with the DSO, Ronmark worked closely with the well-respected Parsons, helping to lead digital initiatives – including a pioneering foray into live concert webcasts – as well as diversity efforts both musical and institutional.

“I have been fortunate to be next to a great leader for almost 17 years now,” he said. “It was great to work alongside him and create all of these things that really changed the way the DSO works. We have a wonderful orchestra on this stage, but we do so much more. “

Davidoff applauded Parsons for leading the DSO to a new era and an explosion of fresh, youthful energy in the “dynamic duo” of Bignamini and Ronmark.

“Preparing us to attract and retain two of Jader and Erik’s greatest, youngest and most inspiring talents – it’s no accident,” he said. “Landing in either of these positions is incredibly complicated. We have landed two next generation leaders who have the closest relationships. There is nothing but the reverse there.

For Ronmark – who is married to DSO violinist Adrienne Ronmark – the connection to the Detroit Symphony goes far beyond his time with the organization: having grown up in Sundsvall, Sweden, three hours north of Stockholm, he listened to DSO recordings, including those conducted by compatriot Sixten Ehrling, the main conductor of DSO in the 1960s and early 1970s.

“To have the chance to lead the organization, I would never have dreamed of this,” he said. “It has been interesting to climb the organizational ladder. It gave me a unique perspective on different aspects of the business – not just what the musicians do on stage day in and day out, but also the wonderful staff who work behind the scenes, and all the work we do in the theater. community. When you see this, it’s hard not to fall in love and want to lead it. “

Korean group BTS will take ‘extended rest period’: why we need to support it and recognize the importance of taking care of yourself