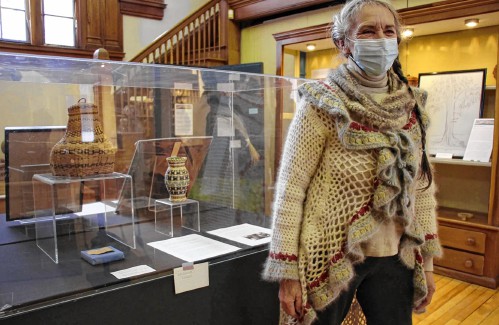 Deciphering the history of the Abenaki

Stories of Native American history are often told from the perspective of European settlers and consist of tales of violence, captivity and disappearance of Native peoples. Or, we don’t tell them anything at all.

But members of the Abenaki tribe and community partners who are hosting an art exhibit at the Hopkinton Historical Society hope to change those stories.

The exhibition presents historical and contemporary works of Abenaki art which, according to the curators, will correct misconceptions and raise awareness of Abenaki culture, past and present.

As you walk up the stairs to the second floor of the Hopkinton Historical Society, the first things that catch your eye are two large canoes, one encased in glass, the other displayed next to it. The canoe in question is over 100 years old. It’s imposing, made from a log that was burned and then dug up, and is juxtaposed with a smaller ten-foot hunter’s canoe made of woven birch bark, cedar and spruce.

Bill Gould and Reid Schwartz designed the hunter’s canoe together, doing everything from collecting materials outside to casting together.

Bill is a citizen of the Nulhegan band of the Abenaki Coosuk and spoke to seasoned builders to build the canoe. Rivers, like Connecticut, which divides the territory now called New Hampshire and Vermont, were not borders, but highways for the Abenaki. Canoes were needed for hunting, collecting goods, and transporting.

“What I’m trying to bring to this is the Abenaki perspective, the importance that these have for our culture and that they have had for our culture,” said Bill. â€œIt was an innovation that is still used today, a feat of engineering. “

Among the curators are Madeleine Wright and Rob Wright, citizens of the Nulhegan Band of the Coosuk Abenaki. It is a former teacher who, with Rob, developed an educational program on the Abenaki of New Hampshire. She now lectures about her culture in schools and says she often has to correct stereotypes about Abenaki culture – and counter the idea that Abenaki should be spoken of in the past tense.

â€œYou still have the idea that we live here in tipis. This is not true. They did not know either that there were people, villages, here on this earth â€, declared Madeleine.

Rob is also a former teacher and said the New Hampshire Native American curriculum has long been insufficient. He and Madeleine hope to bridge this gap.

“It is important for [students] to learn more about the people who lived here thousands of years before the settlers arrived, because it is an important part of the history of the land, of the region they come from, â€said Rob . “And this is a gap that desperately needs to be filled because it has not been properly filled here in New Hampshire.”

For Sherry Gould, past and present converge in the art of basketry. She is the tribal genealogist and citizen of the Nulhegan band of the Abenakis Coosuk and a professional basket maker.

â€œWe want to fill in what has been erased, we want to erase. We just want to lay out a much fuller story, â€Sherry said.

A few meters from the two canoes, a pair of Abenaki baskets sit enthroned under glass. One was made in the mid-1700s. Around the top is the Friendship motif, running through Abenaki baskets, a checkered band probably blackened with walnut.

â€œWe don’t know for sure who made the basket, we just know that it had been in the Hanson family since 1760 and came to Hopkinton with the family and was donated here,â€ Sherry said.

The origin of the other basket is clear, however. It was woven by Sherry in 2020. She made her basket using a friendship pattern similar to the one used in the old basket. At one point, she realized that she had broken the pattern of friendship, but continued to weave. It was a representation of what she saw around her – the division of the presidential election and COVID-19. Finally, the basket came together.

â€œBy the time we got to the top of the basket, we were through the electoral process and the difficult relationships that were heated by this heat of the moment were healing and the pattern of friendship was intact, and that was the basket, â€Sherry said.

The exhibition goes beyond the comparison of historical and contemporary elements of Abenaki culture. There are paintings, poetry exhibits, maps, an Abenaki-English dictionary, and a video showing Abenaki language specialist Jesse Bruchac speaking in Abenaki.

Nancy Jo Chabot, administrator of the Hopkinton Historical Society, helped bring the exhibit to town. In an effort to immerse children in the exhibit, she encourages visiting children to learn Abenaki words.

She did some of this work herself, learning and emphasizing the word Wliwni, pronounced oh-lee oh-nee, which means “thank you” in Abenaki. Chabot says every community in New Hampshire has stories like the ones found in the exhibit.

“It’s just about looking collaboratively to see how things got to where we are now and how things will play out in the future, together walking a path to reinvent history and the present.” , said Chabot.

The exhibition is open until the end of January. The Hopkinton Historical Society is open Thursdays and Fridays 9 a.m. to 4 p.m. and Saturdays 9 a.m. to 1 p.m.

These articles are being shared by The Granite State News Collaborative partners as part of our Race and Fairness Project. For more information, visit collaborativenh.org.

Featured group announced for 2022 Blissfield Bluegrass on the River