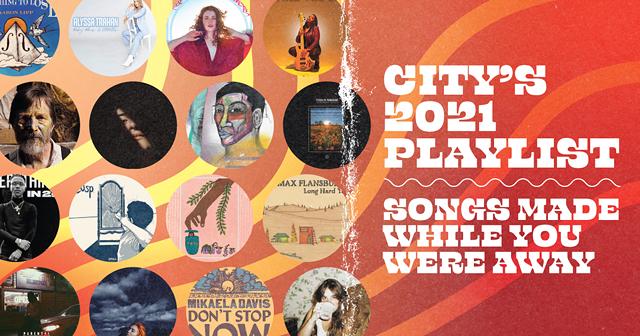 “I Feel Alive” and “Under Control” by Coral Moons

The emerging soul-steeped pop-rock quartet Coral Moons was the surprise musical act of the year for me. Led by dynamic singer Carly Craft from Webster, the band’s 2021 album “Fieldcrest” is loaded with crisp, upbeat melodies, well-crafted arrangements, and the kind of electric energy music lovers crave. Although Coral Moons was formed in Boston, Craft and guitarist Justin Bartlett moved to Canandaigua during the pandemic, making them Rochester’s secret band you need to hear. – BY DANIEL J. KUSHNER

Spencer’s “Lonely As I Ever Was”.

Through his first album â€œAre U Down? Brooklyn lo-fi virtuoso with Rochester roots, Spencer., Wields his knack for stacking on hooks. On â€œLonely As I Ever Was,â€ which he wrote and recorded during lockdown last year, his catchy melodies serve a universal sentiment: unrequited love. “I want you to be mine / You say, ‘In my next life,'” the 2016 Penfield graduate sings, sounding like a one man pop group. Its layers of harmony, guitar lines, and laid-back rhythms make this lonely lament feel a bit more like a party. – BY PATRICK HOSKEN

“Rough Around Town” by Aaron Lipp

Multi-instrumentalist Aaron Lipp is a titan of the Finger Lakes music scene, and his keen sense of American bluegrass is well documented. On the 2021 album “Nothing to Lose”, Lipp throws a wider pop-rock net, but not without dipping his toes into the pool of country music on songs such as “Rough Around Town”. This track has the added benefit of featuring the backing vocals of Oliver Wood from the Wood Brothers. – BY DANIEL J. KUSHNER

Max Flansburg, frontman of Finger Lakes Americana Dirty Blanket, took his turn as a solo artist this year with the album “Long Hard Year”. Recorded at Temple Cabin Studios with musician-producer Aaron Lipp, this collection gets my vote as the best local country album of the year. â€œWarm Beet & Cold Red Wine,â€ written by Jon Itkin of The Crooked North, is a quintessential example of the genre at its best, with extremely clever lyrics and plenty of musical sophistication that give the sound signature a new twist. – BY DANIEL J. KUSHNER

Negus Irap, aka Corey Waterman, has been a part of the Rochester hip-hop scene for several years now. And although connoisseurs were already familiar with the courageous performance and the keen sense of the rapper’s lyrics, his 2021 album “My Name Is Guss” allowed the artist to take his art to a new level of finish, without losing his advantage. Negus Irap’s ability to stop you in your tracks with a devastating and empowering phrase comes through very clearly on “Reset”. – BY DANIEL J. KUSHNER

The Rochester-born group Suburban Plaza continued to impress in 2021 with their distinct brand of hip-hop-infused pop and R&B. Although this family group of Yone, Jerry Rescue, Wave and Dave Hamilton have spent the last few years in Los Angeles producing songs for other artists, they have remained connected to their hometown with music like “TULSA. EP. With the single “Fool’s Paradise”, Suburban Plaza turns its incredibly smooth production and radio-ready hooks to the subject of failed romance, with undeniable results. – BY DANIEL J. KUSHNER

Poignant opera singer-songwriter-turned-singer Sally Louise has used her forties to her advantage, producing quality music that draws generous inspiration from pop, rock, soul, R&B and even a little classic. His full debut album “My Hands Are on Fire” is a definitive statement on his direction as a formidable artist creating substantial pop music you’ll want to keep listening to. â€œHoney, Hold onâ€ has a simple song structure, but the maturity of the writing combined with the vocal prowess of Sally Louise kind of reminds me of the late Jeff Buckley. Worth listening to. – BY DANIEL J. KUSHNER

This beautiful lullaby from singer-songwriter Shara Nova aka My Brightest Diamond was originally released 10 years ago on art-rock musician’s album “All Things Will Unwind”. Although Nova has local connections, she is not from Rochester. So how does this song make the list? The deliberate and sensitive direction of the Music Director of the Rochester Philharmonic Orchestra, Andreas Delfs, for this live performance with the Aarhus Symphony Orchestra cannot be ignored, and this could be a sign of Delfs’ future programming choices. with the RPO. – BY DANIEL J. KUSHNER

“I told you” by Phylicia Rae

One of the key roles of an instrumentalist is to attract audiences without the aid of voice. For Phylicia Rae Sealy, it’s not a difficult task. She has her bass guitar singing and making its way onto jazz radio stations with her distinctive and elegant playing. P Rae’s song “Told you So”, with its prominent R&B riffs, was a flagship single this year, currently airing on SiriusXM’s Watercolors music channel. The song offers R&B riffs prominently with its playing style. – BY GEARY ANN LEWIN

â€œQuality music feeds the mind,â€ says hip-hop artist Glenn French. He released a variety of songs in 2021 on his EP “Day N Night (Trinity)”, and this body of work has an unbroken consistency in terms of meeting his own expectations for substantial music. The French song â€œCelebrateâ€ generated over 12,000 streams on Spotify this year. I predict this song will become one of his classics. In general, we need more Glenn French in 2022. – BY GEARY ANN LEWIN

“When you call” by Cammy Enaharo

Cammy Enaharo has performed on city stages in groups such as Ben Morey & the Eyes, Pleistocene and Gold Koa. But this year, she leaned deeper into her solo career, allowing her songwriting talents to shine. On “When You Call”, Enaharo tells the story of a strained relationship between a parent figure and a child. She delivers carefully chosen minimalist phrases with a singing voice that seems taken from another era, dating back to the R&B singers of the 60s. The arrangement of “When You Call” is understated, with smooth and progressive keyboard parts and slow tempo acoustic guitar samples. But its impact runs deep, subtly drawing listeners into an intimate moment in the life of the songwriter. – BY EMMARAE STEIN

Alyssa Trahan’s “Ain’t Ever Goin ‘Back”

Alyssa Trahan is one of Rochester’s country music gems. It’s hard to determine the best song from her flagship album “Baby Blues & Stilettos”.

But the more I listened to the album, the more I realized that the kick drum and electrifying guitar of “Ain’t Ever Goin ‘Back” paired well with Trahan’s sweet country voice.

The song’s chorus has an intimidating feel, while the verses offer its listeners a “calm before the storm” sensibility. The fun, passionate and moving “Ain’t Ever Goin ‘Back” is part of the best pop country music today. – BY GEARY ANN LEWIN

For Mikaela Davis’ only new original recording from 2021, New York State’s premier roots harpist added a touch of glam. “Don’t Stop Now” finds Davis – a nimble songwriter whose sound keeps expanding generously outward – and his band Southern Star balancing a bright pinch with sharper blues guitar licks. The result is a five minute prayer to stay positive and â€œlet our spirits growâ€ in a world on the verge of disaster. With such a great vibe and a widely open soundscape, the only thing left to do is enjoy Cian McCarthy’s warm Mellotron coda and use the title of the song as a mini-prayer. – BY PATRICK HOSKEN

Two Truths is an electro-folk project that saw the light of day at the height of the pandemic. But on “Brushstrokes” the band members know each other well, creating an abundantly intelligent arrangement with colorful and lively lyricism. While Two Truths draws inspiration from â€œindieâ€ bands such as Radiohead and Fleet Foxes, the sound of this single is unique, combining older elements such as the mandolin with new age electronic drum beats. Leader Blake Pattengale’s voice is smooth and sweet, carrying the song’s central message of nostalgic romance with compelling eloquence. – BY EMMARAE STEIN

Cusp entered the Rochester indie scene this year as a creation of musicians from two different groups: Full Body 2 and Rut. On â€œSpillâ€, the eponymous track from their debut EP, the band show off their talent for writing headbang-worthy and deceptively catchy hooks. The garage-rock quartet is good at cranking up the fuzz, but they refuse to get lost underneath. Singer Jen Bender’s direct and vulnerable voice demands to be heard, changing from buzzing melodies to shouts of command as the song progresses. “Spill” showcases the best of the garage-rock genre – combining complex and catchy guitar lines with emotionally evocative confessional verses. – BY EMMARAE STEIN

“I was the devil” by Calicoco

Songwriter Giana Caliolo’s â€œI Was the Devilâ€ began as a sparse acoustic ballad. The Rochester-area native, now based on Long Island, first released it in 2019 on a collection of demos for their indie rock project Calicoco. The following year at the University of Rochester, producer Stephen Roessner helped turn him into a heavy synthesizer for “Underneath” – Calicoco’s impressive and often fierce new album. Caliolo shed literal tears as he recorded it, and the music reflects their emotion. With repentant lyrics and dense keyboards, the song is immense and overwhelming, as if looking closely at a Rothko painting. In its changing arrangement, however, is a story of gracious self-discovery. – BY PATRICK HOSKEN

Not-for-profit organization founded in honor of Jim Thorpe, along with strategic partners, brings new water-producing technology to communities on the Pine Ridge Reservation