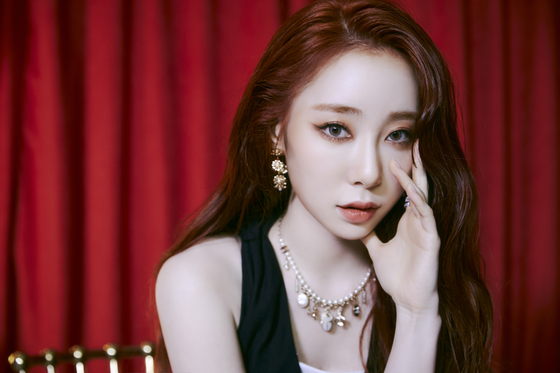 Yoo Yeonjeong, 23, of girl group WJSN, made her musical theater debut last week with a role in the rock ‘n’ roll musical “Lizzie.”

At a press conference Tuesday at the Doosan Art Center in Jongro District, central Seoul, Yoo said she fell in love with the series and her role almost immediately after seeing the script and having it. research.

“I was intrigued by the plot and composition of the musical,” Yoo said. “I strongly expressed that I wanted to try out for this show.”

Much of “Lizzie’s” music is rock, a genre Yoo has never tried before as a member of a K-pop girl group. But Yoo said she took on the challenge with an open mind.

“I wanted to learn the genre, and I thought maybe that could be another thing I could be good at.”

In the musical, Yoo plays Alice Russell, the best friend and lover of Lizzie Borden, the series’ protagonist.

A 120-minute musical backed by just four actors and an energetic score with plenty of high notes, “Lizzie” is a tough role for any musical theater actor. Still, Yoo masterfully portrays his character with compelling acting and a powerful voice.

Yoo Yeonjeong as Alice Russell in the musical “Lizzie” [SHOWNOTE]

Behind her fluid musical performance are four years of training as a musical theater major.

“I’ve always been fascinated by musicals and loved the genre, which is why I chose to major in musical theater,” Yoo said.

Yoo enrolled at Dankook University’s Jukjeon Campus in Gyeonggi as a musical theater major in 2018. The school is considered one of the most prestigious institutions for aspiring musical actors in the country.

“Lizzie” is a musical based on the true story of the Lizzie Borden murder case in 1892 in the United States. It premiered off Broadway at the Living Theater in New York City.

With eight performances per week, “Lizzie” airs daily except Mondays at the Doosan Art Center until June 12.

Outside of the live theater stage, Yoo continues to busy himself with his K-pop career.

On Thursday, she appeared on the first episode of “Queendom 2,” Mnet’s K-pop girl group survival show, as a member of WJSN, otherwise known as Cosmic Girls.

In “Queendom 2,” six top female K-pop artists compete against each other by releasing a new song on the same day. The program is expected to air for the next 10 weeks. The winning K-pop actor wins a global comeback show live on Mnet.

Yoo first made a public appearance on “Produce 101” (2016), Mnet’s K-pop girl group survival program, at the age of 17 as one of the trainee candidates of the school. show from the K-pop agency Starship Entertainment.

Receiving a final tally of 136,780 votes, Yoo made the cut by placing 11th out of 11 finalists making their girl group debut.

IOI, the girl group from the survival program, debuted in May 2016 with the EP “Chrysalis” and its title track “Dream Girls”.

Yoo first came to public notice as a K-pop trainee contestant on “Produce 101,” a K-pop survival show created by Mnet with 101 K-pop trainees from various agencies. Yoo made the final top 11 and debuted as a member of Project IOI’s girl group Yoo joined girl group WSJN, a creation of Starship Entertainment, in June 2016, when she was a member of IOI The other 12 members of WSJN had debuted a few months earlier. Although IOI disbanded after a year in accordance with the contract, Yoo continued her K-pop singing career as a member of WJSN. The band’s latest music is an EP titled “Unnatural” (2021). In 2022, Yoo made her debut as a musical theater actress through a role in the four-person show “Lizzie.”

This information was confirmed by Starship Entertainment on April 1, 2022.

Grammys: these 5 artists who could make history