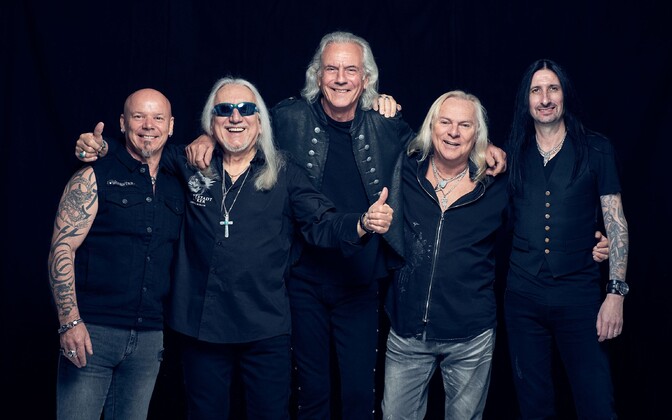 Uriah Heep has already played in Tallinn. “Every time we go, we toast with former Vana Tallinn,” Box added.

“It’s going to be a big celebration of 50 years of Uriah Heep, it’s going to be a journey from the very first album to the last; it’s also a great trip – a roller coaster of emotions. But at the very end of it, the smile on people’s faces will say it all.”

“Performing live is your first love,” he continued, noting that touring and gigging predates any studio or commercial success Uriah Heep or any other band may have had.

The band was the first to play in the Soviet Union, in December 1987, with the advent of the Glastnost era.

“To be honest, we never thought we would go to Russia,” Box continued.

“We had a saying at Uriah Heep that if we couldn’t come to the music, we’d bring the music to the people,” adding that Bulgaria, Hungary and East Berlin were among other places the band played at a era when iron curtain was still made.

Interviewer Hannes Hermaküla had his own take on the band’s status even while Estonia was under Soviet occupation, recalling how he and his friends traded rock records at a time when such items were rare in Estonia.

“Going out there and playing music and finding out how well it was received,” was a reward in itself, Box noted, saying he had heard many similar stories from those who remembered from the time.

“It feels good to the heart. No matter how hard it was to get there, the reward was always the faces of the audience,” he continued.

The band is also releasing a new album after the tour, but it’s unlikely to feature any of the songs from the Tallinn concert, Box said.

“No, I’ll tell you why: if we play something new during the concert, by the time I changed my jeans in the dressing room, it’s on Youtube. It’s the way of the world now.”

The full “Ringvaade” interview, in English, is here.

Uriah Heep plays the Alexela Kontserdimaja in Tallinn, starting at 7 p.m. on November 15, 2022.

Founded in London in 1969 – the 50th anniversary tour had to be postponed with the pandemic – the group takes its name from the main antagonist and sycophant in Charles Dickens’ novel “David Copperfield”.

Popular across much of Europe as well as the United States, their native UK, and around the world, the band are widely regarded as pioneers of hard rock, heavy metal and progressive rock, with albums such as “Return to Fantasy” and “Demons and Wizards” good examples of this.

Mick Box has been the only constant during this period in terms of personnel, which has seen many changes. One of the longest serving former members was Trevor Bolder (bass), who joined the band a few years after David Bowie broke up the Mars Spiders, and remained for most of the time after that, until his death in 2013.

The current line-up is made up of: Bernie Shaw (vocals), Phil Lanzon (keyboards), Dave Rimmer (bass), Russell Gilbrook (drums) plus Box on guitar.