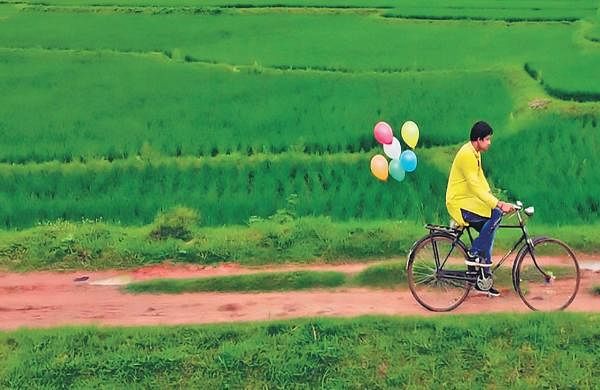 BENGALURU: A young man wearing a kurta clad in yellow, cycling along the splashing green blanket of a village and reliving the childhood days of dancing in the rain and playing with the ball, is a scene that reflects the story of life as a journey with many stories. This is exactly what Manchala, a new music video from Bengaluru band Oxygen On the Rocks, seeks to deliver.

Released by digital media platform Hungama Artist Aloud, the music video is directed by Bilwanath Chatterjee and sung by the group’s lead vocalist, Souvik Chakraborty. Set in Labhpur, the clip shines a light on how a young man (with Indranil Das) walks through the alleys of the villages and enjoys every happiness in life.

The creators of the clip believe the concept dates back to the late ’80s and’ 90s when riding an oxcart, flying balloons, catching up with folk singers, was central to the lifestyle.

According to Chakraborty, the clip is also themed to pass the baton to the next generation who have a dream. This is symbolically conveyed through a balloon which is transmitted by the protagonist to a young child to carry out his dream. â€œThe interpretation of history is very subjective. However, the idea was to wait and watch what the protagonist wants to do in the end. It is here that a man who has accomplished something in life returns to the village and hands the balloon that symbolizes the dream, to the next generation or to the dreamer, â€explains Chakraborty.

The directors wanted to present a very natural storyline in the clip. From the casting of Baul singers from Bengal to the expectation of the rains, the clip consists of real characters and sets. Interestingly, although the video was shot using drones and advanced gadgets, the story appears to be set in the pre-modern era. This can be seen when the protagonist enjoys playing with the balloons, dancing in the rain, using an old-fashioned cycle, and strapping the balloons to his back seat.

â€œInterestingly, the cycle was personalized to make it look old. We wanted a worn-out cycle, compared to the trendy ones we get today. The clip has a classic touch. Moreover, on the musical lines, this project mainly uses percussions and a little of the Western touch. Although we specialize in rock bands, we wanted to reverse the change, putting percussion first, â€says Anish Chakraborty, co-producer of Manchala.