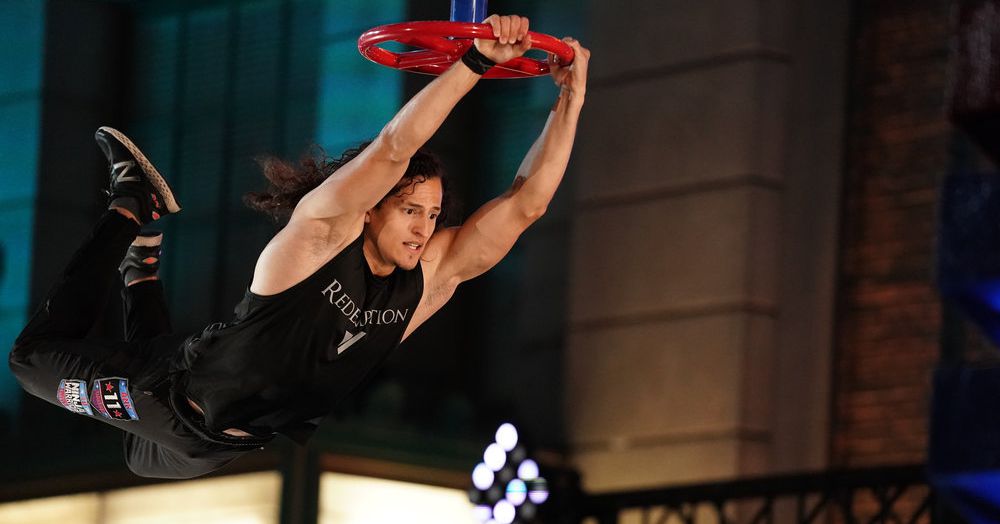 American Ninja Warrior season 13 recap: results of the first night of the semi-finals

And just like that, we made it to the Season 13 semi-finals! The pace only picks up from here. Now we are on the extended course of 10 obstacles. Split Decision moved up to ninth with a heart-wrenching choice between upper body or a balance hurdle. Only the first 15 and the first three women will qualify for each semi-final.

Each evening of the semi-finals will end with a thrilling race on the Power Tower for the Safety Pass (which allows a recovery if necessary on the first or second stage of the national finals).

The passage from qualifying to the semi-finals raises many questions. How will teens fare on a much longer course? Who will go for record time in an effort to reach the Power Tower?

On the first night of the semi-finals, many of these issues were addressed. There is too much to say, so start reading!

Christian Youst: The first round of the semi-finals went to a 16-year-old athlete. Christian got off to a good start and even impressed Matt and Akbar by starting his Warped Wall momentum using only half of the allotted space. Christian reminded us of the brutality of Corkscrew’s twists and turns before bringing us to the new split decision. Balance or upper body? Christian ignored his father’s suggestion for balance and went with Inverter, which looks like a rotating Cliff Hanger / Wave Runner hybrid creation. Christian survived the first plank but hit the water on the transition to the second.
Result: Output to inverter

Christie Brophy: The former Air Force officer and mother of four lost her momentum on Lunatic Ledges and ran aground there.

Sam Sann: Unfortunately, Sam will not return to the national final after falling on the Spinning Bridge.

Karman Selby: The stay-at-home dad survived a close call on Tilt-A-Whirl, but was on Wall to Wall.

Isaiah Wakeham: Isaiah, 20, is the artist behind many of the Ninjas’ competition shirt designs. He wore his own creation as he walked into the course. Isaiah was stable in the first half. Her younger sister, Isabella, has also made it to the semi-finals and if they both qualify for Vegas, mom needs to get a tattoo. At Split Decision, Isaiah chose the UPS. He blurted out “Bad idea” just a moment before he fell into the water.
Result: Output to inverter

Perry Madison: Perry brought the LGBTQ flag with him to the start line and his grandmother, civil rights lawyer Mildred Madison, watched from the sidelines. However, the actor was on Tilt-A-Whirl.
Result: On Tilt-A-Whirl

Caleb Benson: Just a few years ago, Caleb had a pulmonary embolism. In the semifinals, his race ended on Wall to Wall.

Tiana Webberley: The beloved Ninja veteran and stunt pro was back and shared some of her work doing motion capture stunts for video games. Tiana had to flop the Spinning Bridge and then lost her footing on Wall to Wall for a scary moment. But she recovered to break through the warped wall and take a big bite out of the back half. After smiling and yapping on the corkscrew, Tiana decided that balance was her best bet. However, she failed to cross the tuning forks.
Result: On the tuning forks

Wei Wei Qin: He was on Lunatic Ledge.

Wade Lopp: Wade has fallen on the Spinning Bridge.

Adam Naids: The NASA engineer was also on Lunatic Ledges.

Jade Buford: Jade is the first NASCAR driver to qualify for the semi-finals. His season ended on Tilt-A-Whirl.

Max Feinberg: Self-proclaimed “proud geek of the group,” Max is also a 16-year-old Ninja phenomenon. After first wrestling on Tilt-A-Whirl, he was then confident on Wall to Wall. He lifted his heels as he trotted the back half of the course. Dressed in a shirt that reminded us of his mother having breast cancer, Max pulled out the salmon ladder and boldly chose the inverter. He became the first to complete it, with a totally calm demeanor to boot. After constant work on the Spider Trap, Max became the first teenager to complete a semifinal course!
Result: Complete

Christian Washington, Sophie Shaft and Caleb Dowden all of them came across Lunatic Ledges.

Zhanique Lovett: It’s very clear that Zhanique Lovett wants it. The. Sail. Wall. She’s up for it anyway if she can just make it happen. Zhanique was strong on Lunatic Ledges. It looked like she was going to wipe out Tilt-A-Whirl until the bar jumped out of the cradle of the final triangle as Zhanique gained momentum for her descent.
Result: On Tilt-A-Whirl

Lance Pekus: The Cowboy Ninja reached the split decision. There he chose the inverter, but he did not.

Brian Burkhardt: Brian, who’s a lawyer, had probably the wackiest, funniest intro video we’ve seen in a long time. And then he ruled the course. Brian managed to hit his head on Wall to Wall and made his way through the obstacles bleeding. We can’t imagine Corkscrew was having fun right after receiving a blow to the face. Knowing that his strength was diminishing, Brian opted for the Hail Mary tuning forks and it paid off! This saved him enough time to slowly climb the Spider Trap and overtake Max’s time by less than a second.
Result: Complete

KC Boutiette: The Olympic speed skater had fellow Olympian Scott Hamilton by his side. His race ended on Wall to Wall.

Jonathan Horton: Jonathan is an Olympic silver medalist gymnast and a seven-time Ninja Warrior veteran who has never made the national final. This trend continued when he came across Lunatic Ledges.
Result: On the whimsical ledges

Isabelle Wakeham: Remember, mom needs to get a tattoo if siblings Isabella and Isaiah both compete in the national finals. And mom better start checking out the designs because Isabella killed him. She had a lizard grip on Wall to Wall and reached the back half of the course at just 17. Without any problems on the salmon ladder or the corkscrew, Isabella faced the ninth obstacle. Like her brother, she chose Inverter. She fell there, but, as Zuri shared with her, that run meant she was going to Vegas.
Result: Output to inverter

Cory Torkelson: He finished his race on the Spinning Bridge.

Michael Larlee: Michael was on Wall to Wall.

Owen Dyer: Owen put the flamingo hat on the side for his run at Split Decision. He chose the forks and the tuning forks chose water for the 16-year-old.

Abel Gonzalez: Abel beat the corkscrew which ended his year in season 12. He picked the tuning forks and survived. Abel had a moment of emotion at the buzzer.
Result: Complete

Elie Browning: We joined 16-year-old Elijah on the Spinning Bridge. He had a bit of a fight with the downhill barrier on Wall to Wall, but then joined the rest of the teens who had reached the back half of the course. Corkscrew sent his hat flying and his hair flowing. Zuri threw his hat at him and Elijah tried the UPS. But his hold finally gave way.
Result: Output to inverter

Deren Perez: Deren is very proud of his home, Guam. He will be able to continue to share this love with the public. Deren quickly ran to Corkscrew, which locked his trip to Las Vegas. Tuning Forks left him wet, but Deren was delighted to hear that his year was not over.
Result: On the tuning forks

Anthony Porter: Anthony hit the buzzer during qualifying. He was about to get a second buzzer as he made his way to the UPS before hitting the second plank.

Isaiah Thomas: The 15-year-old set the fastest time on his qualifying night. Isaiah hovered over the edge of the warped wall before his run ended on the tuning forks. He will always pack his bags for the national final.
Result: On the tuning forks

Jody Avila: Jody shared his Dominican heritage with us before diving into the course. He was a bit sloppy on the Spinning Bridge, but everything went well. Jody is very tall and it seemed difficult to tighten his frame on Wall to Wall. But being able to cover the distance between the walls was no disappointment. However, he fell over this obstacle when the last drop sign knocked him into the water.
Result: wall to wall

Daniel Gil: After his fall in qualifying, Daniel wanted a big redemption. He wanted the Power Tower. He slipped through obstacles like a fish in water. His stint at Wall to Wall placed him in the national final and ended Jody Avila’s season. Daniel gave a characteristic yawn as he approached the back half. It would all come down to a shared decision, especially if Daniel was thinking about time. He chose to save seconds with the tuning forks and … It paid off enormously. With plenty of time to spare, Daniel closed the Spider Trap to lock down his trip to the Power Tower.
Result: Complete

The Power Tower has undergone an overhaul for the season. Competitors first had to climb rails to a 20-foot rope climb. Then they used a ring to slide up a slanted salmon ladder, leading to the drop shelves, and then to the buzzer.

We have to admit that we thought Daniel would be on the Power Tower. Brian was a surprise to us. Daniel became the winner of Season 12 due to his Power Tower races. Brian had never been on the tower before.

But when the starting bell rings, past experience doesn’t matter. After a close start, Daniel struggled to lock the ring that would allow him to start the Salmon Ladder. Brian was just gone. He took advantage of it and ran with it until the buzzer. Daniel managed to do a few more sections, but Brian took the win in a landslide of surprise.