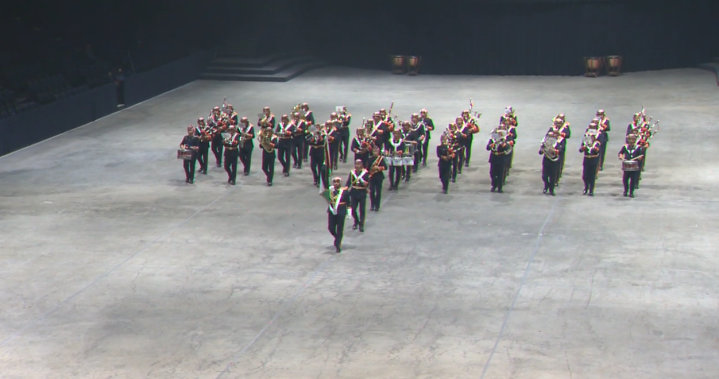 After three long years, in-person performances are back for the Royal Nova Scotia International Tattoo.

In March 2020, when cases of COVID-19 arrived in the province, the Tattoo was one of the first to announce its cancellation. This was its first cancellation in its 42-year history.

Scott Long, the Tattoo’s general manager and executive producer, says they’re ready to bring back the show the city has come to know and love.

Several essential artists and groups from the Tattoo will make their return, such as the Flying Grandpas, the Stadacona Band of the Royal Canadian Navy and the National Band of the Naval Reserve.

But several others will make their debut, such as the German cycling team and the Jordanian armed forces band.

“We love it here in Halifax,” said Nick Lange of the German cycling team. ” This is a good thing. We can also show our tricks a little differently than in competition.

“This is our first time to Canada,” said Omar Altahat of the Jordanian Armed Forces Band. “I’m so happy to be involved in another group.”

Another big name making their debut is High Flyer RB3, an acrobatic group based in Quebec. Russian Baris adds Tattoo to its roster, which includes appearances on America’s Got Talent, The Ellen DeGeneres ShowNBA halftime shows and Cirque du Soleil.

Long says in-person performances like these have taken a major hit since the pandemic began and are in desperate need of public support.

Events Nova Scotia agrees, saying they hope the Tattoo’s return will lead to an economic rebound for local businesses.

“Being able to attract visitors from across the region and around the world…it’s a return to what we normally would have,” said Mike MacSween, Senior Advisor at Events Nova Scotia.

This year, the Tattoo will be free for children under 18. The first show will take place on Saturday evening and will continue until July 2.

Quality Time With Dad – The Progress