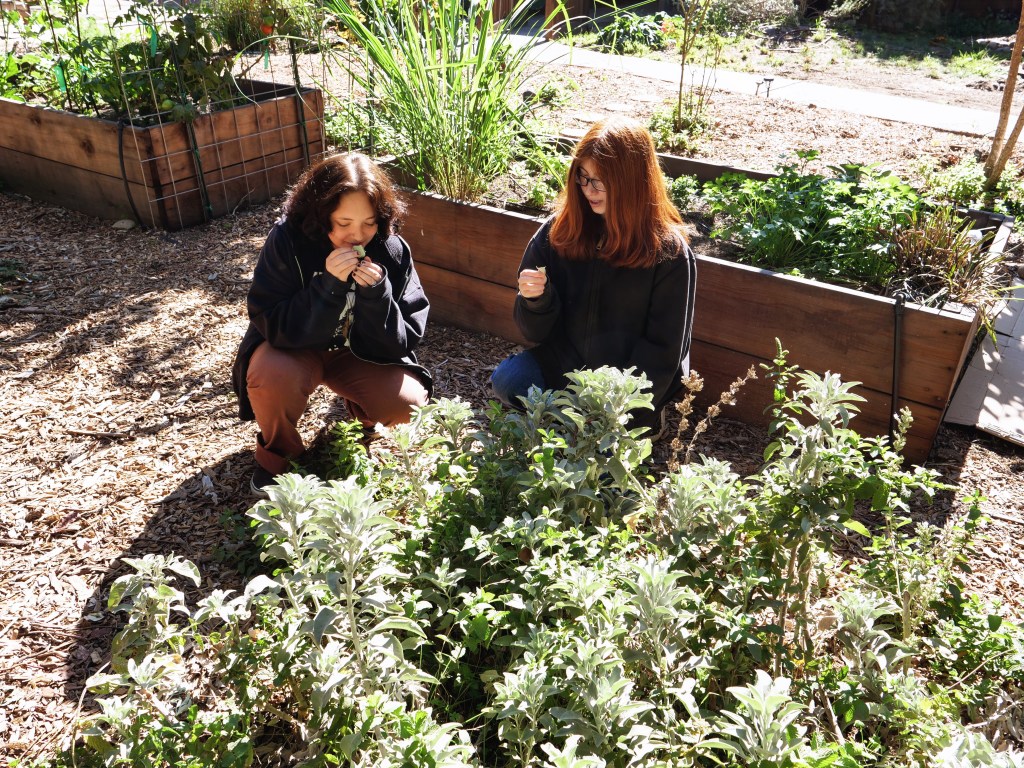 Last week, a group of young Amah Mutsun Tribal Band and their families arrived just down the street at UC Santa Cruz for a “college” event. As the only four-year university in the territory of the Amah Mutsun tribal band, organizers thought it was important to introduce students to its programs and resources.

“I hope this is really an eye opener for them to know that ‘Hey, college is for me,’” said co-organizer Denise Espinosa, the Tribal Council Treasurer.

The families spent the night at a tribal house in Bonny Doon.

Although the house is elegant, ninth-grade student Erolinda Hart said it was not intimidating. The house, owned by the Amah Mutsun Land Trust, is quiet and welcoming, she says. Plus, they allow you to dig up plant bulbs to take home.

“When we first drove up, I was like – I have butterflies in my stomach,” says the land trust’s Hart. “To see that it’s up to us – our whole tribe – to go to safety is incredible.”

The house serves as a restful shelter for land trust stewards as they commute from places like the Central Valley to tend to land in their traditional tribal territory. Recently, it has opened its many doors to young people from the tribal band.

UCSC’s Summer Science Internship Program, along with its umbrella program, CrEST, funded and helped run the weekend event to continue building a relationship with the tribe and giving back to the Indigenous community. . They held an information session at Bonny Doon, introducing students to a summer program they could attend while living there.

Espinosa brought her eighth-grade grandson to the event.

Like most pre-college events, the schedule was packed. In five hours, families toured the UCSC campus and a digital arts lab, walked through the Arboretum Gardens that house the Amah Mutsun Relearning Program, and attended a student panel hosted by the American Indian Resource Center at UCSC.

But perhaps the coolest part was what followed. The students and their families drove to the Bonny Doon Land Trust, and many of them spent the night there for the first time.

Hart, who wants to study medicine, plans to return as a firefighter, paramedic or other medical professional. That night, the tribesman who manages the property shared how close they were to having a fire station for their ceremonies, Hart said.

“She said they were probably [will get one] in three to five years. And I thought, well, I’m going to graduate in four years,” says Hart.

If tribal members like these students decide to attend UCSC, they can visit the house or help the steward, said Lisa Carrier, co-organizer, tribal member and director of operations for the land trust.

At UCSC, the Aboriginal population is similar to the national average, less than 1%.

“It’s a haven, but also a place where they can stay in touch with their culture,” Carrier said.

The Amah Mutsun tribal band has approximately 600 members. They live primarily in three regions: the San Joaquin Valley, the Bay Area, and the Monterey Bay Area. Each member can trace their descent to a point in history when the Spaniards occupied their traditional lands and held them in two missions; San Juan Bautista and Santa Cruz. Prior to the occupation, the ancestors of the Amah Mutsun tribal band lived in over 20 politically distinct bands, villages and communities.

The Amah Mutsun tribal band is not yet federally recognized. They remain committed to reclaiming their sovereignty and cultural knowledge, celebrating their heritage and protecting their traditional territory.

The land trust facilitates such stewardship. Students can participate in gardening, agriculture or civil engineering if they wish, Carrier said.

These educational paths could come from students living in the tribal home for a summer while participating in UCSC’s summer science internship program.

“We’re really grateful to UC Santa Cruz for all the help, … they had a big impact on our tribe, they really did,” Espinosa said.

But right now, for ninth graders, a 10-week summer program feels like a long time away from home.

Hart and his cousin, Niah Pebelier, said they would be interested in returning to the tribal home to learn cultural practices from the elders who live there and volunteer on the property for a week or two.

On October 30, they roamed the estate’s gardens, identifying edible plants and hiding in shelters where sage was drying for ceremonies. They chatted with the other visiting students, trying to remember where the pineapple sage was.

For these students, the event accomplished what it was meant to do: balance comfort and freedom.

As they parted ways, they took pictures together and exchanged hugs.

Carrier hopes this event will have an impact on the next generation of young people from the Amah Mutsun tribe. “I hope this is just the beginning,” she said.