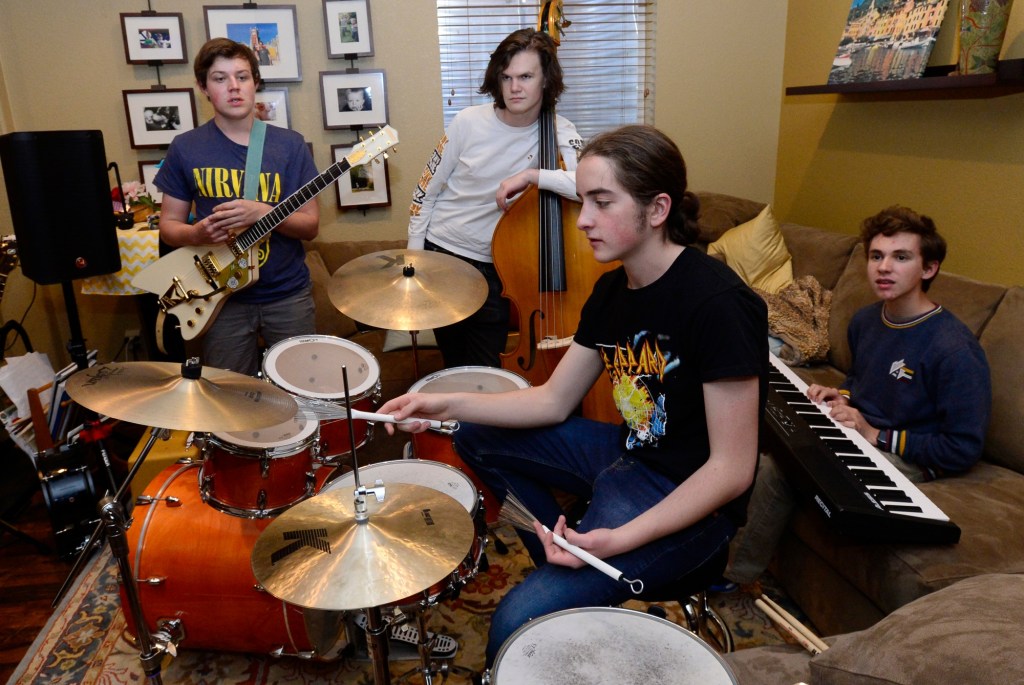 The sound of a blues improvisation filled the basement on Thursday afternoon, as four musicians wearing iconic shoes turned the silence into a soulful beat.

Besides the basement jam, the band, called The Blue Shoes, played many other locations, from the Buffalo Rose in Golden to La Vita Bella in downtown Longmont and Pearl Street in Boulder.

From now on, musicians will have the chance to share their talent in a new place: the International Blues Challenge in Memphis. The Blue Shoes will be featured among 16 acts that are part of a youth showcase. They were chosen by the Colorado Blues Society to represent the state alongside Deborah Stafford & The Night Stalkers, and Lex Quasar & The Sonic Stomp.

Organized by The Blues Foundation, a non-profit organization whose mission is to preserve and celebrate the blues, the challenge will bring together musicians from around the world to play the blues from May 6-9.

The musicians – Ben Egan on bass, Dylan Luther on drums, Brody Mundt on guitar and Simon Von Hatten on keyboards – practiced in the basement of Brody’s Longmont home.

Ben is a student at Erie High School; and Dylan, Brody, and Simon attend Longmont High School. When it comes to their sound, the musicians said they draw from many influences and genres, from rock bands Rush and Led Zeppelin to jazz artist Charlie Parker.

“Our overlap is jazz, rock and blues,” Brody said. “We take a lot of inspiration from more technical and progressive bands, so we like to experiment with musical ideas that aren’t as mainstream.”

Leaning on a double bass, Ben added: “We’re all big music theory nerds. We like to do a lot of things that don’t make sense.

The band’s range of available instruments and gear — including guitar pedals, six drum kits, and a stand-up and electric bass — are all tools to diversify their sound, Simon said.

“We’re kind of able to determine what sound we’re looking for based on what we’re playing,” Simon said.

For their set in Memphis, The Blue Shoes will focus on some of the blues classics with five songs: “Got My Mojo Workin'” by Muddy Waters, “Spoonful” by Howlin’ Wolf, “Whipping Post” by The Allman Brothers Band, and two original songs the band has yet to title.

As the band plans to demonstrate traditional blues playing, Ben said they will “put their own little spice” on set.

“It’s kind of overwhelming,” Dylan said of the opportunity.

The band members said they look forward to the musical relationships they will establish, as well as learning about the culture of Memphis.

Darryl Abrahamson, associate director of bands at Longmont High School, shared a sense of pride that the band will represent Colorado.

Blues resonating with young people, he said, is important.

“The blues is the backbone of all modern music,” Abrahamson said. “We wouldn’t have rock ‘n’ roll or a lot of modern styles like hip hop. We might not have certain types of jazz. Even reggae music has been affected by American rhythm and blues.

Abrahamson, who taught Brody, Simon and Dylan, said he heard the musicians rehearse in high school. Jamming is something they do “constantly”, he said. He praised the students’ vast knowledge and interest in music, which spans from Pink Floyd to jazz pianist Thelonious Monk.

“The Youth Showcase is all about the young people who come to Memphis and take the stage and share their interpretation of the blues with the fans,” Whitmer said. “The other side of that is continuing to make sure the blues is alive and well for generations to come.”

He said it gives them the chance to hear feedback from the judges, who will comment on their performance, despite not being in competition, and also to learn from other musicians.

The Blue Shoes will play this Sunday at a Colorado Blues Society Memphis tee-off and fundraiser at the Buffalo Rose, 1119 Washington Ave. in Golden. Doors open at noon and The Blue Shoes are scheduled to play at 1:20 p.m.

Those interested in seeing where the band will play after returning from Memphis can check out The Blue Shoes website at: theblueshoes.com/new-page.

Abrahamson called the students “devoted to the extreme”.

“Look out for these guys in the future,” Abrahamson said, “because they’re going to be out there professionally doing something, whether it’s teaching or playing or both.”